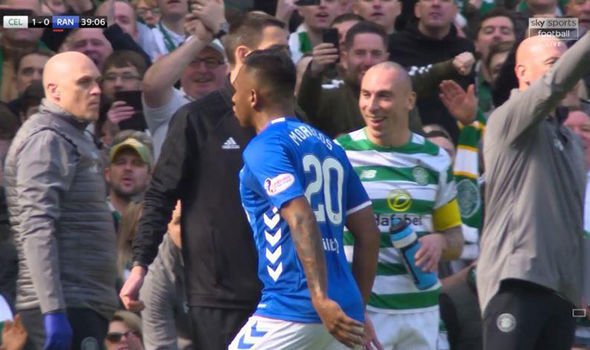 An incredible Old Firm derby at Parkhead has been and gone, and Rangers, despite flirting with an incredible against-the-odds win for a spell, sadly left Parkhead with nothing.

There will be a tonne of reaction and analysis but we will start with the most bleedingly obvious incident which… probably didn’t change the game’s flow that much in actual fact, but which was yet another slap in the face for both his fans, his club and his manager.

Alfredo Morelos, once again, for the (lost count) latest time, has been red carded and sent off, and while there were a minority of fans who somehow managed to defend the indefensible, the vast vast majority called this and him for what he is:

A combustible, petulant Jekyll and Hyde who lets his team mates down so incessantly on the occasions they really need him that, for Ibrox Noise at least, we couldn’t get rid of him quicker if we tried.

We have had absolutely enough of this fool – yes, Scott Brown was mischievous, and naughty with his little off-ball trip on Morelos’ heel, but for Morelos to swing his elbow at Brown in return was… EXACTLY what Celtic’s captain was banking on, and he milked the moment.

Morelos has been a liability for as long as we can remember – this season his petulance has cost his club countless times and while he’ll continue to perform in most of the modest SPL matches, his stupidity, his immaturity and his staggering recklessness on the occasions that matter are, for us, the end of him at Ibrox.

We just can’t be bothered with the circus any more, and going by the club twitter account, neither can they.

The sooner the window is open, and we can get whatever the heck we can for this hot-headed fool the better – and he can start being sent off in someone else’s shirt and costing his team mates elsewhere instead.

The Hyde of Morelos’ split personality is evident too much, and while he was complete garbage before his card anyway, the loss of a man on the occasions that matter is unacceptable.