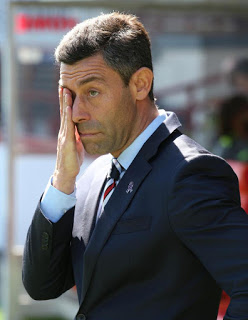 The days of winning nine top-flight Scottish titles in
a row seem a long time ago for the beleaguered Rangers fans, and having to watch bitter rivals
Celtic run away with the trophy this season will have done little to lighten
the mood.
With the league now done and dusted, how Rangers
regroup and rebuild for next season will be key.

Right now, it will take some doing to bridge the gap:
The football predictions from BetHut already point to another league win for
The Hoops next season.
However, the Ibrox club is now back in the top division and, after
where they have been in recent years, that in itself is a bonus.
It was always going to be tough to compete with the
Bhoys, who have had things all their own way since the Gers’ financial woes
sent them tumbling down the leagues, with Brendan Rodgers breathing new life
into the Hoops in what may well turn out to be an unbeaten league season for
the Celtic Park outfit.
The challenge now for the blue half of the
city is to close the gap under Pedro Caixinha and try to get the club back to where it
belongs.
A glance at the Scottish
Premiership table suggests that the chasm between Celtic and Rangers will be
too tough to bridge in just one season and that may well be the case, with the
green and white currently 36 points clear of their Glasgow neighbours.
Scoring goals has been Rangers’ problem,
with only 49 from 34 games compared to Celtic’s 92.
Ten draws have also thwarted their
progress and it will be vital to turn one point into three in tight games next
term.
Mark Warburton’s departure in
February was shrouded in mystery, with the manager stating he did resign and
the club saying otherwise but, even more of a shock was the man who replaced
him.
Caixinha was not exactly a
household name and while he has extensive coaching experience, it has been in
countries such as Greece, Portugal, Romania and Qatar.
Whether or not the Portuguese tactician
is the man to bring the good times back only time will tell but he will need to
work hard over the summer to bring in some fresh faces.
With Celtic certain to recruit in
the off-season, they are only going to get stronger and the Light Blues must respond.
Inevitably it will be tough
to attract big-name stars, with finances still restrictive but, as Leicester
City in the Premier League and the Bundelsiga’s surprise team RB Leipzig have
shown, the size of a club is no boundary to success.
There is clearly unrest among the
fans and the board and management must show strong leadership over the coming
months to ensure that the recent 5-1 drubbing at the hands of Celtic
is not repeated.
Old Firm games are the pinnacle
of Scottish football and they need to be competitive to ensure the league has
credibility.
Celtic have won six consecutive
Scottish titles and have rarely had to break sweat to do so, and it is unlikely
that they will have it so easy in future as Rangers establish themselves back
in the nation’s top division.
It would be folly to suggest that
Caixinha will be able to work miracles in such a short space of time and the
title will surely be beyond his men next year, but a decent cup run and a more
expansive playing style will aid the blue shoots of recovery.