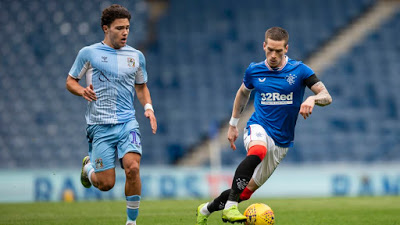 Yesterday’s win over Coventry concluded a promising pre-season of just one goal conceded and 12 scored.

The win on Saturday concluded Rangers’ summer program, but while the score and goals were enjoyable, we urge a major note of caution about taking anything seriously from the action lately.

This, let’s remember, IS pre-season, and as such we’re facing different sides at different stages of fitness, with different agendas as to what each of them wanted out of the matches.

The French teams, let’s face it, weren’t at full pelt – Rangers were comfortable in both matches, but neither side gave Steven Gerrard’s men a particularly tough test, and this isn’t third division French rubbish – this is Nice and Lyon, two European-class teams.

Of course, Lyon did beat Celtic, but we’re just wary about what we can take from either of those wins.

The Motherwell one was good – Stephen Robinson’s men were up for it, but Rangers’ high-tempo was just too much and the scoreline was accurate.

It’s the Coventry one we’re cautious about. This is a Championship team (promoted last term) and for the first half, after a fine first 10 minutes from the home side, the visitors got into their groove and were clearly the better team. Rangers were reduced to useless pot shots from distance and the sky blues looked dangerous on the counter attack.

It wasn’t till they tore up their formation and XI and switched 9 men at half time that Rangers looked the better side. How seriously can we take that second half?

Not only that, but it was their first action of pre-season having not played since 3rd of March. And despite that, in the first half they made it more than difficult for the hosts.

Rangers now travel to Pittodrie, with no more rehearsals – the serious action gets underway imminently and we’re not absolutely sure just how ready we actually are for it.

It’s been a good pre-season in truth, but if you learn more in defeat than you do in victory, we wonder just how much management has been able to take from this one.