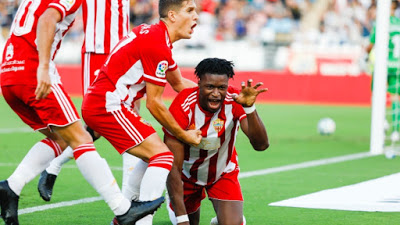 Rangers are claimed to have denied reports of a bid being placed for Senegalese striker Sekou Gassama, after the 25-year old Valladolid man was linked with a switch to Glasgow for a fee of a reported £2.75M.

Transfer stories today hotted up big time after a sudden glut of players were linked in, and while this story is apparently being denied by the club, it’s good to see some players, especially strikers, being mentioned in relation to the club.

Gassama, with just 19 in 72 outings and an underwhelming 3 assists in Spain’s second top flight (he’s never played a La Liga match) isn’t quite the numbers Rangers fans would be looking for in a marquee new signing, and Gassama’s career is one of nomadic journeys around various Spanish sides in LaLiga2.

This certainly doesn’t look like a player who would be worth £3M and he has just one cap for his nation and unsurprisingly no goals.

Historically he’s always played as a CF, not an out-and-out striker or a number 10, but a pure target man CF and that’s the kind of Diego Costa or Daniel Cousin position a 6ft 2 giant like this would occupy.

Rangers, as we say, have seemingly rejected the claims of the bid, and frankly that’s relieving news to us because we do believe we need better than someone with barely a goal every 8 matches.