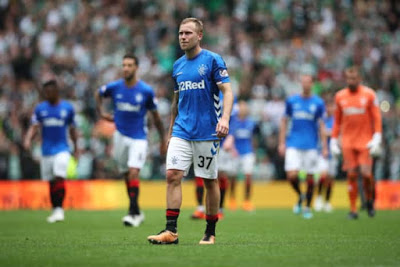 We were genuinely shocked to see Jermain Defoe back only a few weeks after a bad calf injury, and we’re delighted we got his prognosis significantly wrong. Hopefully we’ll be wrong too about Filip Helander’s as well, and the Swede will get back in double time, but we’ll see.

But unfortunately that good news was potentially wrecked after both Scott Arfield and Ryan Jack (AGAIN) went off injured at Tynecastle, and while their diagnoses are not yet known, Arfield has probably been the club’s best overall player this calendar year while Ryan Jack’s defending would be badly missed. AGAIN.

Jack’s distribution hasn’t been the best, more on that later, but his defensive shifts have been excellent and he’s provided so much cover for the backline (bar that bizarre woeful performance at Parkhead) and any injury to him (AGAIN) would see him be sorely missed.

As for Arfield, consistently delivering this calendar year even when those around him weren’t, the Canada international has been, overall, the best player at Ibrox since Steven Gerrard took the reins, and has barely suffered a minute of injury since coming to Govan.

Any loss there would be catastrophic.

Well, we say catastrophic, but aside the Europa League, and our lofty ambitions there, Rangers probably have absolutely nothing to play for this season now, so perhaps it doesn’t matter so much now anyway.

It frustrates us having to talk this way, in a way which sounds defeatist, but we’re just being realistic.

And now our midfield is down to a misfiring Steven Davis, a completely horrendous-form Glen Kamara and no one else. Unless you count Joe Aribo. And we don’t.