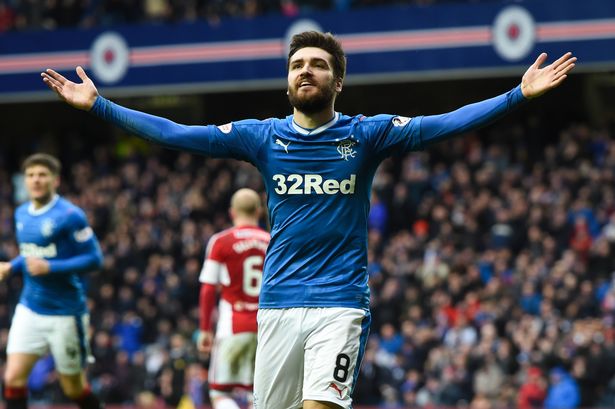 Following on from Gedion Zelalem and Nathan Oduwa, we bring you Jon Toral, the latest in our ‘where are they now’ series having a look back at some of the absolute tosh we signed back in the day, overhyping them as saviours (we were guilty as sin ourselves) and being disappointed by how rotten they ended up. And we look at how their post-Rangers career panned out.

Today’s entry is former Arsenal kid Jon Toral, signed by Mark Warburton in early 2017 as part of a misguided belief he could help strengthen his SPL Rangers.

The Spaniard started out at Barca, and had a nomadic career of the lower leagues in England following a youth transfer to the Emirates, before he arrived at Ibrox. Among others, the well-travelled youngster visited Birmingham, Grenada, Brentford (obviously), and of course Arsenal’s various youth levels and found himself in Govan thereafter.

And for a couple of matches we saw a technically impressive midfield holder, with some good balance and decent linkup with fellow January loan Emerson Hyndman.

Unfortunately, it just never really happened after that.

In his defence he managed 3 goals and 3 assists in 15 appearances, which isn’t the worst from a central midfielder, but he didn’t have the stuff to really assert himself in the shirt.

His loan expired that summer and he was back at the Emirates.

Hull, of all places. Yes, many of you may actually know he ended up with a half-decent gig and joined the Championship side in 2017, having amassed 50 outings with a respectable 10 assists and 4 goals from the engine room.

Toral definitely wasn’t the worst player we ever got on loan, but he’s another one who found the weight of expectation at Ibrox too much for him and he never really sustained that promising early form.

While we wouldn’t exactly say his career is a roaring success, a life in the English Championship is pretty solid overall and even though Spain won’t call him any time soon (ever), he’ll consider where he is to be half decent overall.

Although, it’s worth noting two months after he joined, Bread Man got fired…