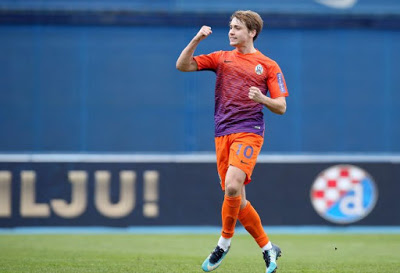 Rangers have been again linked with a January move for Croat international Lovro Majer, an attacking midfielder who hails from Dinamo Zagreb.

The 21-year old, contracted to the HNL side till 2023, is regarded as a promising up-and-coming playmaker and with 4 assists in 16 domestically, it’s easy to see the potential the former Locomotiva attacker has.

Rangers were credited with interest at the start of last month in the winger, but it went quiet and nothing came of it at the time, but with the January window underway in earnest, Steven Gerrard is potentially interested in replacing the out-of-favour Jordan Jones with a left footed winger/attacker at a fairly low price.

Of course, the Croat, capped once by his national side and a recent regular for the U21s, being contracted for another 3 years won’t be buttons, but is unlikely to cost a huge amount, more than likely the same fee or less than Rangers paid for all of Barisic, Katic, and Albanian flop Grezda who all came in at £2M.

This kid would be seen as one for the future, and whether he’s ready for the first team is another matter.

But we’ll see how the story runs.