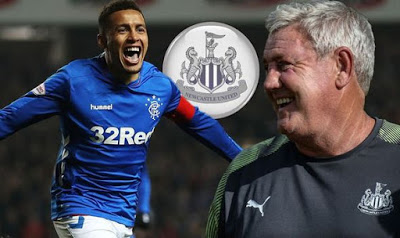 Rangers striker Alfredo Morelos is certainly in the news again these days, and following the press linking James Tavernier to Steve Bruce’s Newcastle, the Colombian has joined the Geordie side’s interest (again) to suggest the St James’ Park giants are looking at a double swoop for both players.

Morelos, as we all know, is completely unsellable, and it would take a stonking bid for Rangers to even look at it in January – Steven Gerrard (and Dave King) have both confirmed even £50M wouldn’t be enough, so unless Newcastle fork out £60M+ Rangers aren’t even going to blink.

Bruce is said to be a big admirer of Morelos and of course tried to get him at Villa, or at least had moves in that direction but nothing came of it, and now with Newcastle having a great season the former Sunderland boss is said to be monitoring the situation.

He’s also been linked with captain Tavernier, again, but when asked about his interest in the former Newcastle player last summer, failed to properly reject it saying:

“I really don’t know where that came from and I hate it when people talk abut my players so I’m not going to comment on anybody else’s.”

Not an outright no, then, and he reportedly sent scouts to watch the Old Firm, and they’d have been impressed.

And if indeed the interest in Morelos is serious, the Colombian put in a hard-working shift in the same match, even if concerns about his discipline would have resurfaced.

As for price for Tavernier? Club captain so Stevie wouldn’t want to entertain anything that isn’t massive, and given Tavernier is a big part of the Gerrard puzzle he’s not one we’d want to lose out of pure disruption grounds. His current market value is allegedly £6M according to some independent sources, but Rangers would be looking at at least double to even consider it. Probably closer to £15M, at his age.

But January is such a sensitive time to lose players, Newcastle would have to be very, very persuasive.