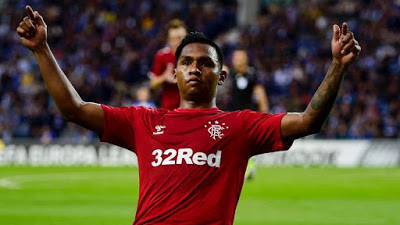 Following Monday’s ‘breaking story’ about Inter bidding for Alfredo Morelos ‘this week’ the dubious source has now changed tact and claimed it’s Spurs in fact who want him.

As we know, we’ve covered the Spurs story on here so won’t entertain it further, but we’re beyond tired of click-for-profit sites using Morelos, and indeed Rangers, for their own coffers.

And this nonsense story about Inter was complete rot from the start – they already have four world class strikers, and they have indeed been linked to another, but his name is Giroud, not Morelos.

Indeed, one look at the dubious source’s Twitter account shows they very much use Rangers as a source of traffic and attention, and while we wouldn’t say they get absolutely everything wrong (we’ve seen a few exclusives they got bang on) the big stories like these are designed purely for clicks.

When even the Daily Star confirm the Inter story has ‘backed down’ you start to really wonder what lengths some sources will go to to make things up in the name of all things Rangers.

This is not to completely poo poo these sites – they clearly do have sources, albeit most of them are called Alan Hutton, Noel Whelan or Jackie McNamara, and we also know they’ve only revealed those names as a condition to remain in certain dubious news aggregators.

But the amusing backpedal on the Inter story gives some idea of the tabloid rubbish sources like these are known to contrive in order to get big attention and hits.

This is not to be hypocritical – Ibrox Noise is a commercial group ourselves, and we rely on revenue to breathe as well, just like any commercial group – but we absolutely will not make things up to get traffic.

All our content is either exclusive, original/opinion, sourced, or we’re relaying information from elsewhere – and if we learn something was wrong, we outright admit it – we’re nowhere near too proud for that.

And at no point are we going to exclusively claim Alfredo Morelos will sign for Manchester United!

Well, not unless we get an astonishing exclusive…