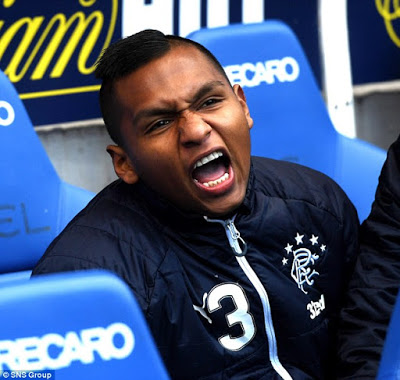 Despite the club confirming Alfredo Morelos is NOT for sale, the press continues to suggest a pile of clubs are after him.

Using Bookies’ odds, a group of at least 12 clubs have been ‘named’ (mostly lazy journalism in truth) as being interested, but the one damning part is bookies are usually pretty accurate, because they reflect both likelihood and betting patterns.

No one believed them when Steven Gerrard’s name first appeared as favourite for the Rangers job, but that one was bang on.

And as such, because it’s our duty to report the information, here are the 12 clubs, in reverse order of likelihood, that are currently being highlighted as monitoring Morelos:

Villa. What a shock.

We know some of these clubs have had the player watched, with Eintracht, AC Milan, Borussia and Fenerbahce also mentioned as having had scouts monitor some of his displays, so we do know he’s under clubs’ radars.

But today’s confirmation that a call from ‘third favourites’ Newcastle was outright rejected suggested anyone seriously wanting Morelos is going to find something beyond stubborn resistance.

Unless they find silly money. And no one is going to pay £75M. Are they?