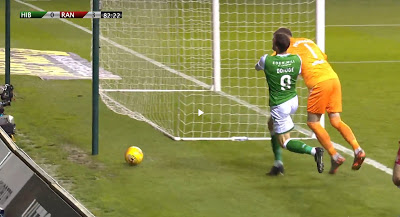 We’d like to talk only about the rather sumptuous nature of Rangers’ rampant stroll at Easter Road last night, and we mercifully will get to the football side of things over the course of the day, but the off-ball garbage which has regrettably reared its ugly head again has been the dominant fall out after events in Leith.

So we shall cover one more disappointing incident and try to move on with more constructive content for the rest of our coverage thereafter, and that was, despite referee Nick Walsh’s excellent handling of this match, that the otherwise on-point man in the middle completely overlooked the ridiculous assault on Allan McGregor by Christian Doidge and let the striker away with it.

Walsh was on the scene, but simply got in the middle and didn’t take action, despite, to quote even raging Rangers fan Chris Sutton’s commentary, the WWE assault on the goalie.

The ball, calmly escorted back to McGregor by Nikola Katic, was not there to be won, and McGregor took over shielding it over the line.

Only Doidge wasn’t having it. Filled with frustration over a horrendous night for Hibs, the Welsh forward grabbed Rangers’ number one, pushed him, and dragged him by the jersey hurling him into the advertising hoardings. 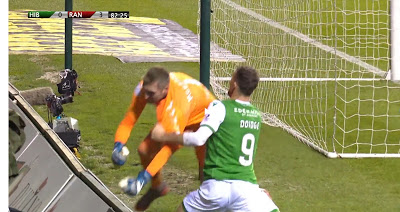 Sorry, but on no planet is this acceptable – if this happened in the street, it’s assault and could easily lead to arrest – Walsh, for his otherwise fine night, really dropped the ball here and it’s no wonder McGregor was beyond livid.

We know butter has more than melted in our goalkeeper’s mouth since he came home, and a flawless person who wouldn’t hurt a fly he is not, but character assassination is not a valid prosecution, only the events are, and the facts are Doidge grabbing McGregor WWE style and ensuring he went flying into the hoardings.

McGregor, seething with rage, angrily asked Walsh why no action was being taken – frankly we’d like to know that too.

We do feel a little bad – Walsh did a good job of protecting all players last night, even if he was lenient towards Borna Barisic’s honest but mistimed early foul, and we are harsh on refs a lot, and this one did a mostly good job last night.

But this deserved a straight red, and it’s a blot on his night that he let it go.