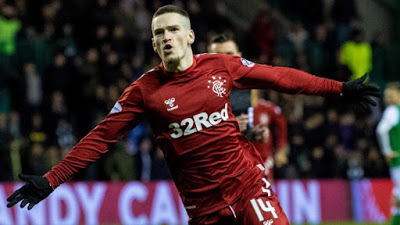 After a sad amount of time needed to cover the unsavoury from last night, we can finally turn our attention to the good, and believe us, there was a lot of it.

In this entry we’ll will look at Ryan Kent’s finest 75 minutes since rejoining from Liverpool, and how pleased we were to see a player much more like the Kent we know, looking more free, trying less hard, and just playing the game, just like we suggested.

Of course, the early goal helped. It helped the whole team – a notorious venue like Easter Road and the home threat of taking a big scalp again, and Rangers were under pressure to rise.

And they did – from the first whistle Steven Gerrard’s men meant business, and while the opportunity came about fortuitously, there was nothing lucky about Kent’s crisp, accurate and powerful finish.

And from thereon in, Kent, and Rangers, never looked back.

But we do focus on Kent – his issue lately has been trying too much, too hard, and trying desperately to impress.

It almost felt like that goal lifted a weight off his shoulders, and thereafter he was free to play. The touches, flicks, dribbling, a good 70% of his game was back, and while he didn’t constantly dribble and beat 80 men before sticking it in the top corner, his performance was by and away the best he’d produced since making his move permanent in September.

His passing, movement, composure and all-round balance plus pace were much more the dangerous Ryan Kent he can be when he’s less stressed and less worried about trying to impress.

We also have to pay credit, again, to his acknowledgement of the crowd when he came off – as against Motherwell, he paid specific attention to applauding them despite not having quite the best match and looking a little downhearted – to rise above personal disappointment and appreciate the crowd shows maturity and genuine pleasure on his part that he got the move to Rangers that he wanted.

And it seems like Ryan Kent is starting, slowly, to get back to where he should be.

And that is more than exciting.