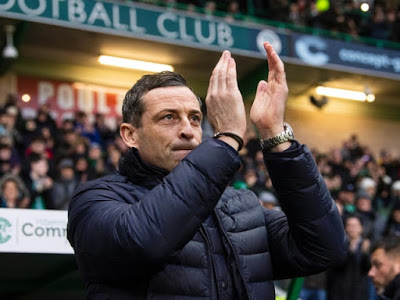 We’re going to start this article off by saying we’re not suddenly turning into Hibs fans, but rather we’re being dignified Rangers who can rise above the petty hate in Scottish football and give praise elsewhere when it is deserved.

And Hibs’ boss Jack Ross’s response to the despicable actions of a few at Easter Road are to be commended, especially when we compare his comments to the ‘exuberance’ nonsense of the vile Rod Petrie some years ago.

To be clear, Ross was about as explicit as it gets and we praise his humanity and standing up for what is right, rather than blindly backing idiots in the club’s support:

“I can’t quite get my head round why anybody would make the decision to throw a glass bottle at another human being. Some people argue that behaviour on the pitch and around the pitch affect that – that’s garbage, that’s an excuse. Someone who does that deserves the consequences that come with it.”

Whatever we feel of what went previously with Hibs in past encounters, CEO Leeann Dempster’s public apology for their fans over the Tavernier incident and now this does show as a club they’ve moved into the 21st century in terms of their management and while the Middleton loan didn’t work out, it shows Rangers willingness to work with them now thanks to improvements in their conduct and integrity.

Ross’s comments are bang on, and pull no punches. Frankly we’re actually a little disappointed in our own manager’s biting of tongue which only said we don’t want to see it at football grounds. You are allowed to say what you think Stevie, you really are.

But as for Ross, we applaud the tone in his anger over this and his willing to condemn dreadful behaviour whichever the club the ‘fans’ belong to.