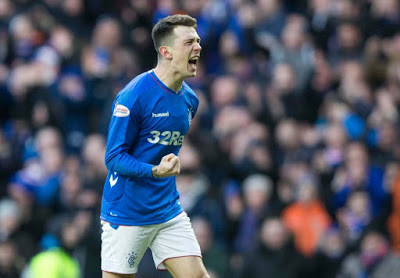 Rumours online, and we hasten to add we’re not 100% on these sources, have alleged that star midfielder Ryan Jack’s sterling 2019 has not gone unnoticed and sides down south have taken an interest in securing his services.

The Scotland midfielder, having a rare off-day at Parkhead yesterday, is in easily the form of his life, having thrived on the new attacking midfield ‘Frank Lampard’-style position he has now been deployed in, with box-to-box work punctuating his now-new game style, but Championship sides and some PL sides have been mentioned as monitoring his progress.

Of course, he’s recently signed a new long-term deal, so it would take big money to persuade Rangers to consider anything, but more importantly the potential future captain doesn’t want to be anywhere else.

A boyhood Bear, he got his dream move in the summer of 2017, and while it took him a campaign to get up to speed, his performances are now indispensable to the way Steven Gerrard plays.

So if anyone wants to sign him, and we do believe sides are interested in his rise to prominence the past 18 months, they really will have to dig deep to even make Rangers turn their heads.

Because anything less than silly money and a huge wage for the ex-Aberdeen man would be rejected out of hand.