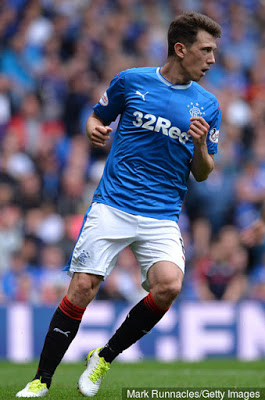 We’ll discuss more about our Portuguese chums Braga in the coming weeks and months before February’s last 32 clash with Ricardo Sá Pinto’s side, but up front Rangers have a big problem with the loss of the most important player outside of Morelos for the European clash.

Ryan Jack’s second yellow on Thursday meant he misses the opening leg at Ibrox which is a big big blow, but the good news for Rangers is he will be back for the second leg at the Braga Municipal Stadium on the 26th when Steven Gerrard’s men will seek to secure passage to the last 16.

It has a number of pluses and minuses.

Obviously Rangers would have wanted the away leg to be first, generally that’s the ideal scenario for these ties, but it is what it is and we’ll have to deal.

Furthermore, Jack, if he had to miss either of these two legs, we’d have picked Ibrox because the trip to Portugal will need all his industry and work in the middle to ensure help safe passage.

But it’s still a huge huge miss – Jack’s been arguably the biggest influence on the pitch this entire season, and Rangers have only lost two matches with him in the side – both against Celtic, and only one of which was a bad performance.

If Jack is in the side, Rangers just don’t lose – even YB Rangers were one up, then 1-1 before Jack went off, and it was that late winner in his absence and Tavernier’s error which saw the home side take the spoils.

So Jack not being there for the first leg will be a huge ask for a lot of filling of boots. And frankly, if we’re honest, we don’t think we have an adequate replacement – how could we?

So the three (or four) midfielders Stevie selects that day will have to work doubly, triply as hard.

We’re sure they will.