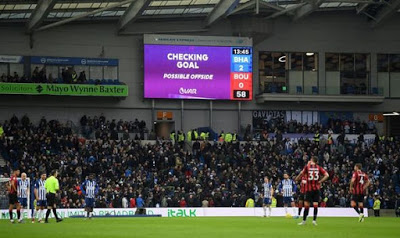 In fact pretty much every nation with any kind of notable premier league – even Poland.

Scotland is the only ‘modern’ nation to not have VAR – yes, the A-League has it, Morocco has it, even the Saudi top flight has it, but the only domestic league with any ‘credibility’ which doesn’t is our very own Scottish Premiership.

Following Kevin Clancy’s appalling blunders and yet more ridiculous decisions which (nearly) hurt Rangers, it has to be a categorical change made for next season.

True, not everyone likes the technology, and even rare decisions can be ‘wrong’ – but technology-assisted refereeing is going to be wrong a LOT less than human decision making.

We don’t want to be too harsh on these men (and women) – they (mostly) make honest calls and try to get them right. But a lot of the time they get key decisions wildly wrong – Celtic’s offside goal in the cup final, their handball goal today – these have to be reversed because they’re flagrant miscarries of justice.

Most sports do have video replay tech, and the chance for officials to consult. We’re utterly in favour of this for Scotland, not just to make it fair for Rangers, but for all. It will go against us too – we’ll get reds or yellows or pens against us too when previous they’d go unnoticed.

And that’s fine – it just makes it an even playing field. And that’s all we want.

Surely there’s no argument against this.