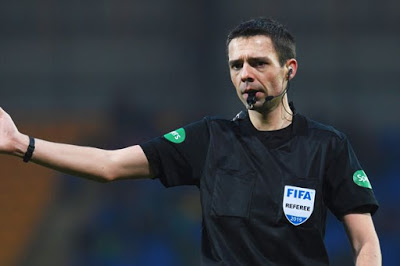 Ohh Kevin Clancy. How you must have wished you had a green and white shirt on today.

This is now the clearest evidence yet that Kevin Clancy just cannot put his bias aside, and giving a few yellow cards in positions that were not going to affect the match is not going to hide you from the flack this time.

Today we are going to call it as we see it.

Rangers won against a ref who was all but openly playing as Celtic’s 12th man.

When Rangers pulled on a shirt, it was an immediate penalty. When Celtic almost pulled the shirt of Aribo, nothing was given.

Punch Morelos on the balls. That’s no problem for the Celtic players, “referee” Kevin Clancy didn’t even give a yellow card.

And, of course, he misses a handball goal.

Offside goals in Cup finals, and handball goals allowed in a match that could have decided the league in the final match of the year. Yes, it’s just the referee having another bad day, and we are meant to ignore what we are seeing.

I’m sorry, but not this time. This was a match that was billed as the game Celtic would all but win their ninth title in a row, and get 30 million from just appearing in the Championship league.

That means there was a lot to play for today, a whole lot, and this is the level of refereeing we have to put up with.

However, Celtic suck big time. In the final they won through the help of a linesman, who just couldn’t see three offside players standing in a line. Can I ask what was he being paid for? Then, today, they were also second best for much of the match, and the referee again tilts the field heavily against Rangers.

It now seems Celtic are a team that requires the refs and linesmen to bail them out with soft penalties, and questionable goals, and the problem is the referees and the Linesmen seem just too eager to help.

It’s now time to finally bring in VAR, because the referees in Scotland are either biased, or they are just not good enough. It’s either one or the other. However, I just don’t care anymore. It is time for technology to take over, and take “bad decisions” and “bias” out of the referee’s hands.