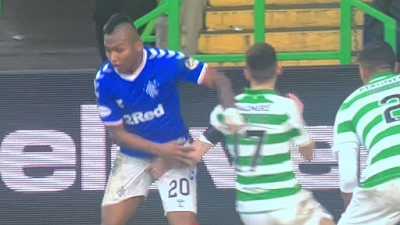 On a final note before the new year, the SFA citing Celtic’s Ryan Christie for a noticeable yet unmistakably minor infraction shows more than anything the dramatic sea change over the past week.

While Alfredo Morelos will miss the return to action come next year by way of his own silly fault, Christie’s grab at the Colombian while certainly mischievous was by no means the most vicious assault we’ve ever seen.

Yet the Celtic attacker is being charged for it – little else demonstrates the very sudden shift in power in Scottish football.

Prior to kick off this incident would never ever have been called up, but now it is, and it is up to Compliance Officer Clare Whyte to decide whether or not it deserves action.

As an alleged Celtic fan herself, she probably won’t, but even we admit there are worse offences in the game.

And yet, this one got the spotlight.

The sands of time are shifting, and the future is orange.