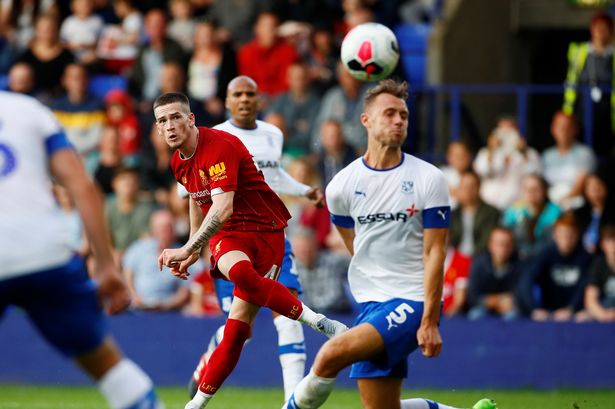 As if we weren’t already bored enough as it was about Ryan Kent, the Liverpool winger has been in the news again.

Back at Anfield and putting in an appearance for Jurgen Klopp’s men against Tranmere at Prenton Park, Kent’s level became apparent as he struggled to make any kind of impact, bar a couple of glimpses here and there, and we’ve long said on the site that while he looks periodically brilliant for Rangers, he evidently isn’t of the standard required at Liverpool and that showed.

It wasn’t like he was awful, he wasn’t, he just didn’t stand out, and didn’t get enough of the ball while not using it well enough when he did.

But the main talking point is his future, and the claim and counter claim by the press as to what Klopp wants to do with him.

Some reports allege Rangers have been given first refusal on a loan – which basically means Kent gets no say in where he goes, and Rangers would be the ones recalling him. And that wouldn’t be ideal to have a player who clearly doesn’t see Rangers as his first choice, and certainly not on loan, come here outwith his own volition.

Others are claiming Klopp has outright blocked Kent from going back out on loan – they claim he will be used as a squad player, for some depth, and, to be cynically honest, we don’t even think he’s good enough for that at Liverpool.

And then there’s the ‘no decision taken’ reports that say Klopp is simply continuing to run the rule over the likes of he and Harry Wilson and decide later on what he wants to do with the two youngsters.

Neither of them seem to be good enough for the standard needed at Liverpool now – the Scousers have elevated themselves into world-beaters the past two seasons, and to even be in their squad now requires a special player.

And that means Kent will struggle to break through – opening the door for Steven Gerrard. But with Jordan Jones now starting to motor in a Rangers shirt, and Jake Hastie in backup, is Kent even a player Rangers need?

Do we want to spend another year developing him for Liverpool?

Or is it time to just draw a line under this one and move on, permanently?