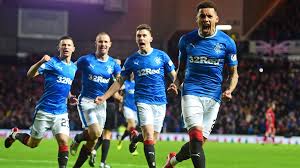 Caretaker manager, Graeme Murty certainly got one over current Aberdeen manager Derek McInnes who has so far done well at Pittodrie over the last 4 years and is still evidently in the frame to take over from a failed Ped Rangers side. Is he the right man for this massive revamp job at Ibrox? Last night’s Rangers performance left me again with some doubt about McInnes taking over.

Rangers were a joy to watch last night and looked remarkably fit at last – well done Murty! He changed the team about and boy did it pay off. After Graeme’s first two good performances against Partick Thistle and Hearts, came the totally unexpected and inconsistent failures against Hamilton at a shocked Ibrox Stadium and an inept away display at Dundee.

You never know what kind of performance you are going to get from this current pool of players. I was so pleased at the way last night’s players started the game and much to my surprise they kept it up throughout the game.

19-year-old-rookie centre half Ross McCrorie was my man of the match playing unexpectedly as our holding midfield player and I thought he excelled in his new position. He looks like nailing this vital part of the team, if he can play consistently at this very high standard. I understand why Tavernier was given the champagne after scoring from the penalty spot after Holt was poleaxed in the box by Tansey after only six minutes and also getting on the end of a great pass from an ever-improving Windass. Oh my gosh, some Rangers fans can’t stand Josh – see what I did there!

With McCrorie performing well it left Holt and Jack to get more active with the attacking part of their game and it helped to push Rangers forward more and Pena scored the so important second goal after great work from Holt who was popping up everywhere.

The defence were in control with Alves playing particularly well and Wilson doing a solid job in central defence and John and Tavernier driving effectively and causing trouble for Aberdeen down the wings, it was good football to watch – please keep it going this Sunday at Pittodrie.

A good night for Rangers was completed with Motherwell drawing with Celtic and the night finishing with the Ibrox club in third place only three points behind Aberdeen.