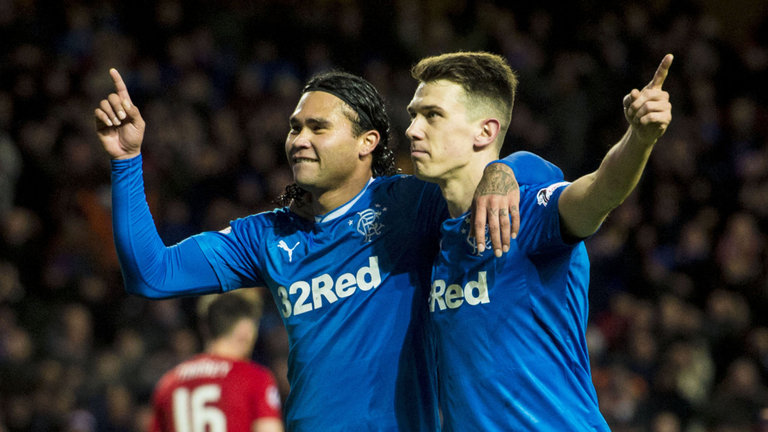 Last night’s thumping win over Aberdeen was easily Rangers’ finest 90 minutes since promotion. There was so much good to pore over, with excellent performances throughout the team and a work ethic criminally inconsistent until the starting XI took the field at Ibrox yesterday.

However, for yours truly, one player stood out head and shoulders above the rest. For all the plaudits rightly given to Bruno Alves, Declan John, James Tavernier, Jason Holt and Ross McCrorie to name just five, another selection showed just how good he is but how staggeringly frustrating he is too.

I am talking, of course, about the bizarre enigma that is Carlos Pena.

Colombian striker Alfredo Morelos claimed some months ago the Mexican is the best player he has played with:

Whether this meant so far in his career, or so far at Ibrox is less clear, but it is nevertheless lavish praise and even Graeme Murty has furnished the 27 year ex-Leon man with superlatives about performances in training.

But what an inconsistent guy he is. Far too often at Ibrox he has looked lazy, slow, disinterested, isolated, and generally a complete fish out of water.

But when you take the performance in Perth and the first half display last night before he ran out of juice, there is absolutely no doubt he is the best technical player Rangers have, and the most gifted too – maybe even in the SPL, period.

The lad does things and sees things others simply cannot and do not. At one point he flicked the ball effortlessly around three Aberdeen players before backheeling to an onrunning team mate – unfortunately for him Miller had mistimed his run and the ball went straight out of play.

Pena is a truly puzzling one – when he is not in the mood, like at Hampden v Motherwell, he cuts a lone figure, a lost soul and someone who looks like he would rather be at home watching TV.

But when he shows up and gets more involved, he is one of the best technical players in the SPL. He could be quicker, and his first touch is often a shambles, but he has evidently struggled with the claustrophobia of the SPL and finds the pace tricky to deal with.

Carlos Pena is clearly used to having more time on the ball than he gets here.

But even when he gets none, he can make impressive things happen – on 20 minutes he looked off balance and went for a outstep of his right boot shot from around 20 yards and forced Joe Lewis into a very smart save. It was subtle, and it was a minor event, but he made something very difficult look so easy, and this is the talent the guy has.

This is the kind of display that makes him undroppable, but then he shows up and seems to disappear from an entire match and one wants to strangle him.

Is Carlos Pena Rangers’ best player? Technically, by a mile. Does he work hard enough? Not often enough.

But last night he influenced much more of the match than he frequently has and therein lies the rub of the issue.

Do we persist with him and hope he produces more like last night? Or give up and accept it is just too infrequent for the outlay?