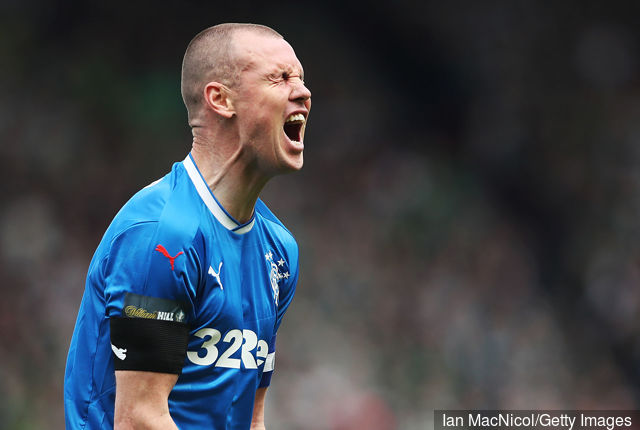 If one player has summed up Rangers’ season in a nutshell, it has been Kenny Miller. Trying with all his might but delivering next to nothing.

There is no question Kenny was Rangers’ best and most important player last season, but that form has deserted him this campaign and even taking into account Pedro Caixinha’s dropping of him, his two league goals all season in eleven matches tells their own story.

This site was a vehement defender of Miller – and we do still respect what he has done for the club, but enough is enough. The guy is completely finished as far as top flight football goes, and has been atrocious this entire season.

One incident summed his season up against Dundee – the ball was in midfield, there to be won – three Rangers players, Miller included, surrounded the home player, and Miller just watched. He did not get stuck in (as is often used as his defence, that he harries back and tackles) – he stood there and just looked.

He is no longer offering anything up front, either as a supporting striker or as the main man, and cannot deliver deeper in midfield either. His passing is now diabolical and you would not bet on it improving at netbet.co.uk.

It is also evident the man simply has too much influence and power at Ibrox – while we were not in favour of Caixinha’s treatment of Miller, there is a nagging increasing feeling now that the Portuguese was onto something. He just did it the wrong way.

Miller’s time is over. He is nearly 38 and it is now ridiculous to have him start every match. He offers zero (albeit not dissimilar to everyone else really) and is not even leading by any great example either. Not any more.

This is not to smear him, we remain indebted to his past contribution and what he has delivered for us many times in months and years gone by.

But it is time to move on. We would be absolutely fine with him in a staff coaching role – the man has wisdom and knowledge, and can certainly help the youngsters.

But as a player, absolutely not.

Mind you, there is one slight flaw with ditching him; who the heck replaces him?