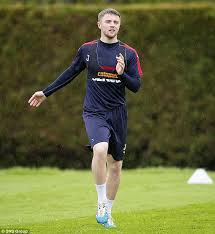 The good news that Niko Kranjcar is back once again training at the Rangers Training Facility, must be pleasing for our under-fire Rangers boss.

Although he is one of the most talented players at the club, I would recommend leaving him out of the next two games to allow his knee injury to mend exceptionally well before putting it under severe stress and taking the chance that he may break down again.

When Warburton signed the highly decorated Croatian international star in 2016, the fans were all genuinely excited at the prospect of watching Kranjcar strutting his array of passes all over the park.

We were also impressed when Mark brought in ex-Liverpool and England under 19 captain Jordan Rossiter. In his first two games for Rangers, you could easily see his class, but alas, he cannot for some reason keep himself fit enough to have an extended run in the team.

He is potentially a better all-round-player than Jack, but unlike young Jordan, Ryan always seems to be fit to play regularly in the team. If both Kranjcar and Rossiter cannot manage to stay fit until the January transfer window, then Rangers will be left with no option but to cut their losses and let them go and off the wage bill.

A match fit Kranjcar would still be a major asset but, he MUST remain uninjured during a run in the first team. How many setbacks can 33-year-old Niko take in Scotland? He is a class act when fit and he may be the one to call a halt to his own career if he continues to get injured.

The SPL league is probably not in his best interests due to the exceptionally rough tactics employed by most of the untalented teams slugging it out in the bottom six clubs.

But Niko and Jordan are not the only injury concerns of late. Lee Wallace, Danny Wilson, Declan John and a few others have all struggled with various physical ailments causing us to wonder why? Is it luck? Bad physiotherapy? Poor diet? Overly strenuous training?

I am also recommending young Rossiter to play a few games in the under 20’s team to gain his match fitness before throwing him straight into the first team. I really hope that Jordan can start to show his undoubted potential within another four weeks.

Due to both players having been out with long-term injuries – they should get more time to fully recuperate before throwing them to the brutality of the hackers in the SPFL?

Let them play a few bounce games before they pick up a different injury due to coming back too soon because it will take much longer for both of them to fully recover.

I would like to see Jack and Rossiter in the engine room of the Rangers midfield. It would make us more difficult to beat and give us more chance of winning the ball back to start more attacking moves for the good of the team.

But a lot of all this depends on Rangers having a full squad. Only four weeks ago there was not a single injury problem – currently Rangers have a mild blight.

Sooner it clears up the better.