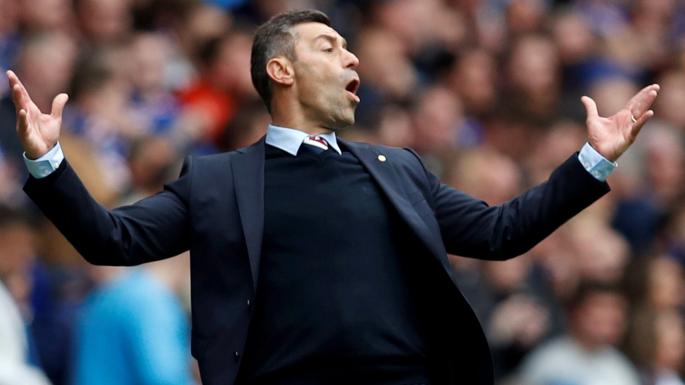 So another big match, another Pedro Caixinha debacle. Before I continue, it is clear some of you readers think the sun shines out the man’s backside. You will defend him beyond the club, and you think he deserves years. If you are one such, I advise you to stop reading and go to another site which caters for your tastes.

With that out of the way, Rangers have been, again, disgraced on and off the pitch, both by the team, the manager and the tactics.

Ibrox Noise never had a hope in hell we would win against Motherwell – an in form side, Scotland’s most so, while we patch our way in and out of some fleeting flirts with form. We knew this match would be tough, and Motherwell, like Celtic, bullied us into submission.

They did cross the line, yes, and referee Steven MacLean was a disgrace of a ref, but he let our own Bruno away with murder and failed to spot a multitude of other sins on both sides.

So it is nothing to do with him, but the harsh reality is, again, it all comes back to those board members who reckoned appointing an unknown random from Portugal with a lifelong sub-50% record was good enough for Rangers.

And it is has turned a great number of fans, eager for their side to do well, into resigned into mediocrity because they believe it will come good.

It will not. Pedro is not, never was, and never will be the right manager for Rangers.

The guy drops the excellent Jason Holt, rendering Graham Dorrans impotent again, while persisting with the absolutely horrendous Josh Windass. Meanwhile Carlos Pena retreats back into his Mexican shell and becomes invisible, making this site and those who gave him big credit v St Johnstone look like absolute idiots for daring to believe in him.

And it is all the will of Pedro.

It was telling that when sent off, Pedro kept as far away as possible from the directors as it was possible to be – meanwhile his Motherwell counterpart Steven Robinson was right among his suits as thick as thieves.

That is a picture of a board that knows it made a mistake, and a manager who knows they do not support him any more.

Pedro is a joke of a manager, it is that simple. We are Rangers for heaven’s sake – our managers have been Uncle Walter, Alex “Helicopter Sunday” McLeish, big Jock Wallace, the great Scot Symon and the legendary Mr Struth.

To back Pedro as good enough in company like that is unfathomable. And that some still think the board got the appointment right is beyond us.

Pedro needs to go. He needs to take his crazy management away from Rangers, as far away as possible.

Rangers have still not won one single big match under his management. Every single meaningful match under Pedro has ended up an embarrassment. The one exception appeared to be St Johnstone but then they just got gubbed by Hearts for their third loss in a row – they are absolutely out of form and the win against them means so much less than it was felt it did at the time.

Up against in form Motherwell? Mince. Pure and simple.

We have been criticised recently – claims there is an ‘agenda’ to get Pedro out. Wow – way to state the obvious guys. Yes, we want a GOOD manager at Ibrox, good players – you are absolutely right there is an agenda to get Rangers GOOD again.

Anyone disgusted by this ‘agenda’ really needs to figure out why they support Rangers.

Here is another pointer for you – Steven Robinson signed 18 players this summer – a whole new team for Motherwell. They are fourth in the table and absolutely smashing it. Rangers signed 10 new players, scraping onto third, with 20x the budget of Robinson, and some fans think Pedro deserves more time and is the right man.

Pull the other one guys.

But he did not appoint himself. Three or four board members made this call, and are every inch as culpable as he. Their decision was not in the best interests of Rangers and they are accountable to that.

Where we go from here is simple. Sack Pedro, admit your mistake, and appoint a manager who can take us forward.

If Walter could turn Rangers around in 2007 and turn PLG’s shambles into Scotland’s best team overnight with the additions of just Ehiogu, Weir and Thomson, it is possible to turn round this squad into something that can deal with the SPL.

But it cannot be Pedro.

Rangers board, you have made a mess of two appointments now in a row. This really is last chance saloon.