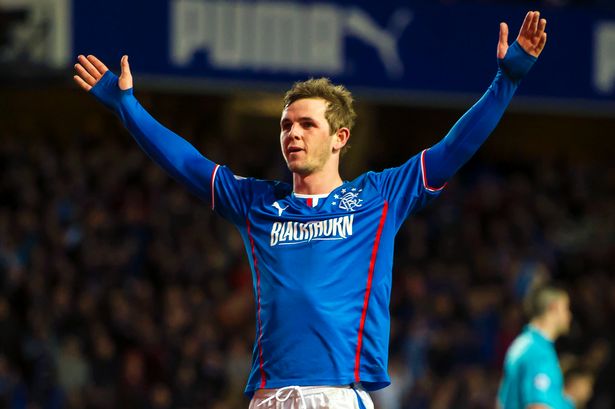 As Rangers fans know only too well, there is a curious phenomenon taking place with regards departed players.

In the majority of cases, they are excelling at their new clubs above and beyond what they did at Ibrox.

Ibrox Noise has covered this situation, its bizarre nature causing us to try and look at both sides of the argument, in both explanation of it and confusion about it – probably making us look a touch contradictory.

But what is football if not a bastion of contradiction, paradox and emotion?

And over the past day or so ex-Rangers winger David Templeton has shed significant light indirectly on the whole affair and may just have offered up the most convincing theory, one the site has more than touched on already.

The former Hearts and Raith flanker opened up on his own time at Ibrox, stating the obvious that it probably did not go to plan, but providing a little insight in terms of this new era at Ibrox as to why these departed souls are doing so damn well at other clubs.

“It is a huge change going there, the expectancy, the pressure, everything. When things aren’t going well, it is a tough place to play. I wasn’t playing as well as I knew I could.”

What Temps appears to be getting at is the well-known but hard to quantify theory that the pure pressure of playing at Ibrox, especially when the climate is not the greatest, is enough to reduce even good players to miserably poor, heaping the pressure on them further.

We know us Rangers fans are a hugely demanding lot, and we have nowhere near adjusted to the dichotomy facing us which the site addressed some time ago. Hopefully we never have to accept ‘where we are’ and will soon find ourselves back where we belong in a decent time scale, but while at the same time right now Rangers are a shadow of our former selves we equally do not tolerate it and expect the world.

And that world of expectation makes us try to elevate Templetons to being Baxter, Dodoos to being Super, McKays to being Laudrup. Figuratively of course – no one ever made those comparisons nor am I, but Baxter, Super and Godrup is what Rangers fans expect, and when our more modest incumbents obviously cannot get close to that quality, the pressure mounts.

“At the time, you could never say no to Rangers and it’s just unfortunate things didn’t work out for me. For all I know, things could have gone a totally different way and I could still be there. At the time I didn’t perform as well as I wanted to and had a few injuries there as well.”

And yet he too seems to have picked his career up at the infinitely less demanding Hamilton who currently sit proudly in the top four.

Rangers is a seriously pressured place, and Templeton’s insight really is valuable – O’Halloran, Garner, Waghorn et al were not all 100% terrible for Rangers, but their quality only came through in glimpses.

The pressure was just too much for them to cope with an SPL Rangers and fans expecting a battle with Celtic.

Super Ally missed tonnes more than he scored, but he had the mental strength to keep on trying and the team was good enough to keep giving him chances – the current one is not, so each missed chance by a Waghorn etc is a lot more noticeable.

We at Ibrox Noise are critical. No getting away from that. We say what we think and we often get dog’s abuse for that honesty. But this kind of insight from Templeton does compel us to urge less demand on the players, including from ourselves.

Until our Rangers are back where they need to be, and we have the calibre of player who can handle a bit of flack when things go bad, we need to give the ones we have our backing and cut them slack when they make a hash of things.

One day we hope to be the Rangers we expect, but until then, Templeton’s words really do strike a chord with us.

We are fans like everyone else though, and when things go wrong we will probably be as outraged, incensed and appalled as everyone else – but that is football, is it not?