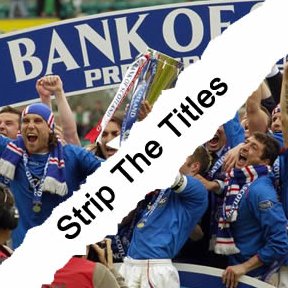 Over the past 48 hours two very important events occurred in the history of Rangers FC. First, Stewart Robertson was democratically elected to the board of the SPFL, for Rangers’ first representation on it since league restructuring in 2013. And secondly the board onto which he was placed has now finally confirmed the nonsense of title stripping and EBT investigation are not on the agenda.

In short, at long last, the mentalist idea of Rangers being stripped of titles because of rank misunderstandings of how EBT schemes operate has been officially put to bed.

Do not mistake me – the lunatics in the Scottish football asylum will continue to howl to the moon over the topic, the same lunatics who ignore Livie’s indiscretions of recent years and Celtic’s own transgressions too.

But as far as the suits go, the topic is a busted flush. I mean, we all knew that, we all knew this whole title stripping nonsense was exactly that. Only in Scotland could such a subject gain any kind of momentum enough to make Joe Punter actually canvas for titles to be rescinded. Especially for an act which had nothing to do with the action on the pitch or even Rangers’ own coffers.

But nevertheless a board of directors who control the management of Scotland’s league game have concluded there is no case to answer and no investigation merited.

I mean, initially Hibs’ Rod Petrie was frothing at the gills when he ‘confirmed’ the topic would in fact be investigated, and that it was a valid area of discussion.

The man would love nothing more than an exuberant investigation of anything to do with the BIG BAD RANJURS, especially when we remember how he completely underplayed Hibs supporters’ disgraceful behaviour in ‘that’ cup final – not even his mates in Scottish football and the media could put a spin on that shambles.

But his wishes have been denied, and thank goodness Rangers have a representative on the country’s top table now, something long overdue.

Robertson has taken a wee bit of flack from some quarters, with some thinking he is not a proper Rangers man in that position of authority. But he is in the right place on the SPFL board to exert an important level of influence, with some views that the man he replaced, Peter Lawwell, quit to switch to the SFA equivalent because of the title stripping nonsense; either based on the fact he wanted to play no part of the circus, or because he knew he would be outvoted. Or even worse, because he did not support any title stripping at all and made haste his departure to avoid flack from his own club supporters.

Whatever the truth, Rangers now have a man on the country’s club game’s board, and it is high time Rangers started to weigh in with serious clout among the issues which affect us and the sport north of the border.

And that starts by dismissing the rubbish of title stripping, and EBT this and that. It was a stupid notion and now that the men (and women) in charge of the game here have concurred and ditched it, perhaps it is time for the fans to move on too?