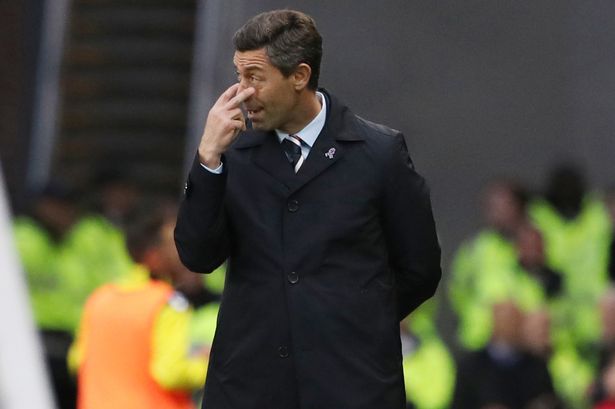 Article by: Richard, for Ibrox Noise
Rangers fans are rightly fuming at the diabolical state things have gotten into so quickly, and desperate times call for dramatic responses.

I want to promote Graeme Murty as our new short-term interim manager, as Rangers have to do something radical.

Giving Murty the opportunity to shore up the damage that Pedro has created buys the board more time to sign an experienced, preferably Scottish, manager.

Dave King and the rest of his directors must show leadership and bravery in this current shocking situation, and do something positive to try and appease the hordes of livid Rangers fans.

Graeme Murty is by far the cheapest and possibly the best option available during this horrific time in Rangers’ history. He is experienced in this position having held the job when Warburton and Weir left for Nottingham Forrest.

He made a marvellous fist of it the last time he was given the project of shoring up the bread man’s mess. He showed great man-management skills, got all the players together, organised them brilliantly and, after a couple of dodgy outings, had them believing in his tactics. He even proved to the fans how Rangers could get a result against Celtic and other top teams.

Let’s see if Murty can help to turn things around once again for a club that is in a dire predicament.

The mortification felt by Rangers fans today is still difficult to comprehend after Tuesday’s disastrous performance and calamitous result. Pedro was always a dangerous appointment and one from which it will take some time to recover.

How we could lose to a lowly-part-time-team from Luxembourg who had never won a European game in 13 attempts beggars belief. If it wasn’t for Pedro, they would have gone 14 games without a win.

Warburton never had a Plan B. Caixhina doesn’t EVEN have a Plan A.

We now have Mark Allen in place as our new Director of Football to help Murty in his first few months of the new interim job (if he gets it).

There is always the chance Graeme may not want this poisoned chalice, because Pedro has made such a pig’s ear and has had a damaging, ineffective and destructive start to managing Rangers.

In only 5 months, Pedro has reduced us from being the world record holding Rangers to a laughing stock.

I am not saying my solution (be Murty as interim or even as a poster suggested Pedro’s new assistant) is the perfect answer, but in these desperate times, at least it will be by far the cheapest option. Murty stepped up to the plate the last time and proved himself a far greater success in five weeks than Pedro has in 5 months.

He briefly took over from Warburton last season and got more out of the players than the bread man ever could.

But after paying out most of the season ticket money on transfer fees, plus the profit from only one Europa Cup game at Ibrox as our football income, we have no real money to pay Pedro off.

Ibrox Noise are often accused of being too negative for asking questions of first Warburton and now, Ped the Ted. Some of our readers believe we are disloyal to Rangers, but that just isn’t true, as we only give it out when we feel it is really necessary. The comments told me to stop being negative and to give the HUGE GAMBLE of hiring manager Pedro a chance to see what he can do – well now we know!

Whether the board are willing, or able, to make the changes necessary remains to be seen.