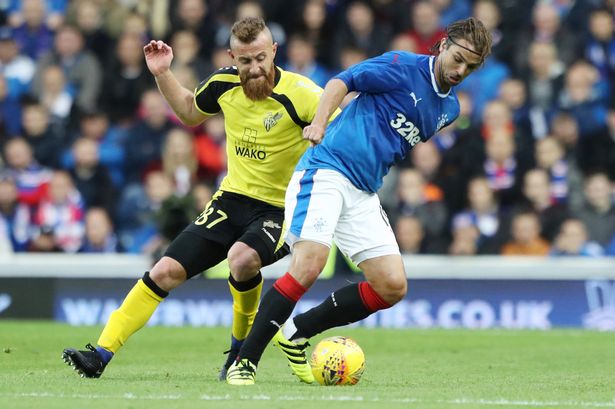 Robert Miller, a regular on the site, got us thinking about comparisons between current playmaker Niko Kranjčar and past legend Ronald de Boer.

His question raised definite parallels between the two – both beset by injuries and fitness issues, and both brilliantly creative and ‘quarterbacks’ for their Rangers teams.

Looking at Niko first, he is a 32-year-old, 6’ 1” Croatian (former?) internationalist who has gained at present a total of 81 caps playing for his country.

He is obviously currently still playing for Rangers in the Europa League and the SPL, and plays as an attacking central midfielder, but can also operate as a winger or as a second striker, playing in behind the hole.

On 23 Jun ‘16, Kranjčar signed for Rangers on a two-year deal, stating that it was a “big honour and privilege” and a “big responsibility” to be joining a giant club. He was out for a long time injured when he joined Rangers, but he played some games and did show enough of his undoubted talent.

He kept telling the fans that once he was fully match-fit you would see a different quality of player. He was right, he got a lot fitter and started to show his genius in starring in the SPL games. Everything was going fantastic with him when disaster struck in a training ground accident.

Niko suffered a cruciate ligament injury in early October which would sideline him for the rest of the season. In Jan ‘17, Kranjčar spoke about the progress of his rehabilitation and estimated a return in six-months; although he did acknowledge the severity of the injury could have led to him retiring.

Kranjčar made his return to competitive first-team action after eight months out, the match against Progrès Niederkorn was only his 10th game for Rangers in the Europa Cup on 29 Jun ’17. It was a stunning return, with a man of the match display in his 69 minute-appearance, during the sellout Ibrox match. It was also his brilliance that set up the goal for Kenny Miller to score the winning goal.

Personally, I couldn’t believe how well Niko played in his first game back. It was the only uplifting part of yet another lacklustre and plodding Rangers performance with Ped the Ted in charge of a wrongly-picked team.

Going back into the past, though and Ronald de Boer is a former Dutch and Rangers midfielder who played for the Netherlands national team as well as a host of huge clubs in Europe, and is the older twin brother of fellow ex-Ranger and current Crystal Palace manager Frank de Boer.

He had the vast majority of his career success with Ajax and currently works as Ajax A1 assistant manager.

In season 2000–01, Ronald joined Rangers because of manager Dick Advocaat. Other Dutch internationals who played for Rangers at that time were Arthur Numan, Fernando Ricksen, Bert Konterman and Giovanni van Bronckhorst. He played in 26 games in his first season and scored 7 goals, operating mostly as second striker but also quite adept in the hole, just like current playmaker Niko.

If Rangers can get half of de Boer’s ability from Kranjčar, it will have been a worthwhile piece of business. Just need to keep him fit!