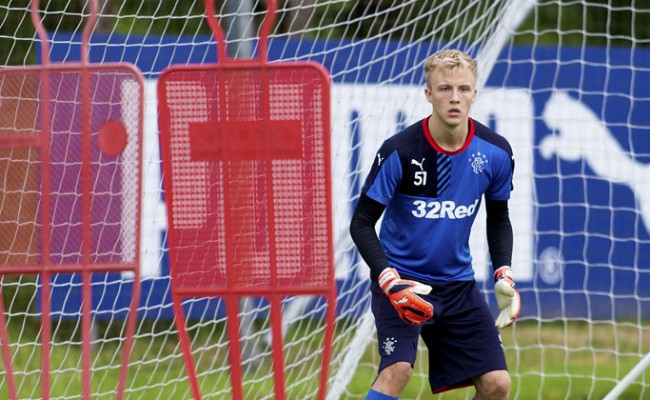 When you see McCoist, Warburton and now Caixinha using very few of the youth players for our starting 11, you know that something has to change. For Murray Park to be considered a complete success, the strategy for the academy boys over the next 2 to 5 years must be revamped.

Planning is already in place to rectify this situation through Craig Mulholland and his other coaches new way of thinking.

Robby McCrorie, our 19-year-old, 6’ 2” goalkeeper will be playing football with League One team, Berwick Rangers after signing a loan deal until Jan ’17. Let’s use this perfect example of the way things will be progressing for a selection of our other talented youth players.

The Scotland U19 and Rangers U20’s keeper has a lot of experience at youth level and he will still train with Rangers for about 4 days a week with new goalkeeping coach Jose Belman, who was recently brought in by Pedro to replace the aging Jim Stewart.

This way Robby gets the best of both worlds by training with Rangers and playing his senior football for Berwick who are managed by John Coughlin, who has been trusted by Craig Mulholland to give Robby the first team experience that his talent in goals fully deserves.

“We have player transition strategies in place for all Academy players trying to make the transition from the Academy to the first team. Robby is in line with his projections based on U20’s appearances and his international appearances and now his first loan to play first team football is important. His strategy over the next two years will see Robby join a part-time club for his first loan as this crucially allows him to work with our first team on at least four days every week, which is a critical part of his development at this stage. We envisage that his second loan would be to a full-time club and over the course of two seasons he will achieve in excess of 60 first team games which will add to his preparation to hopefully achieve first team football at Rangers. We wish Robby and Berwick well and we are looking forward to monitoring his progress closely on a weekly basis.”

McCrorie was No.1 for Graeme Murty’s under-20 side last season, playing in all 33 games and has featured on the bench for the first team several times since his first call up against Dumbarton in 2014 as a 16-year-old.

This left a vacancy for another top youth goalkeeper to replace Robby and Rangers stepped in to sign young 18-year-old Celtic player, Aidan McAdams to play for our U20 side. Aidan is very highly rated by the Ibrox scouts and seemingly has a sparkling future ahead of him. It’s understood the ‘Gers got McAdams despite late interest from a few English teams vying for his signature.

At the moment Celtic have a glut of goalies, with 3 very experienced keepers in Gordon, De Vries and Fasan in the first team squad + McCabe, Doohan and Hazard in the goalkeeping development side. With the excess of stoppers at Celtic Park, it was an easy decision for Aidan to sign a 3-year-deal with Rangers.

Rangers head hunted the goalie and it will cost £55K compensation, which may become more depending on the success he makes of his Ibrox career.

Robby is now going down the same route as one of our other goalies, 21-year-old Liam Kelly. On 8 Jan ‘16, Liam who is a 6’ 2.5” stopper, joined East Fife in League Two on a six-month loan and during his time at Bayview, Kelly played in 16 league matches and was part of the side that won the League Two title. It was very successful for both the player, and the team, and we should now have a good on-going working relationship with the Fife club. It might be a good idea to loan them a player or two from our academy for this coming season.

Upon returning to Rangers, Kelly travelled to the United States with the Rangers first-team for a pre-season training camp. However, on 15 Jul ‘16, he was loaned out to League One team Livingston until Jan ’17, which was so successful that he was rewarded with an extension until May ’17 and he ended up playing in 40 first team games. He obviously impressed Pedro Caixinha enough to earn himself a new 2 year deal which ties him to Rangers until the summer of 2019.

Liam refused to rule out a further loan deal and may attract a Championship or SPL team to play for next season. He is hoping to be involved in the club’s Europa Cup adventures if he can, even if it’s just travelling with the squad for the experience.

Such plans are exactly what Craig Mulholland wants to happen to Robby and all the other academy stars who are earmarked for loan deals to other clubs. This system is a winner for the younger players, Rangers and the teams who benefit from this initiative.

Arguably we are already seeing this system starting to blossom due to the success in the close season of Barjonas and Beerman.