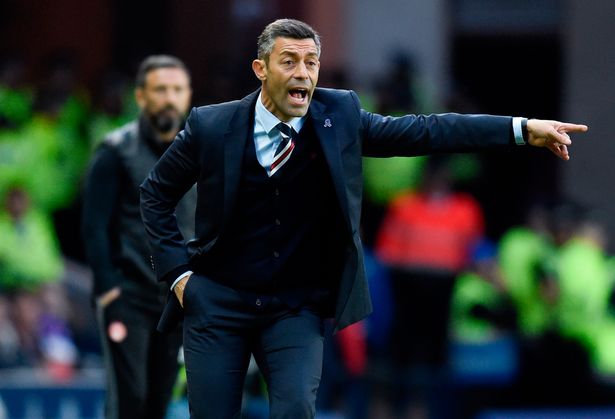 When a new manager comes in, there is often a period of adjustment – from formations, to selections, to how the press are handled. Fans equally have to adjust to the new way of doing things, given how locked they previously were into the last manager’s methods.

There is often a honeymoon spell, where the new boss ekes out extra from his new squad of (usually) underachievers and fans often poke fun at the ex manager pointing out how the new one is getting so much more from the same players.

And when we watched Pedro Caixinha’s debut against Hamilton, it looked very much the same process. It looked like the regular bunch of dross was actually working as a machine, smoothly oiled, in a new formation, and the 4-0 scoreline was entirely reflective of that display.

Unfortunately, Pedro Caixinha’s debut remains the best match under his charge, and few could argue the performances since then have been at best unconvincing and at worst, abysmal. And that everything surrounding this bizarre Rangers’ regime is at best eccentric and at worst amateur.

From the immature spat with Aberdeen boss Derek McInnes, to these increasingly odd press conferences which convey a mixture of defiance, confusion, and stubbornness, to line ups and formations which show absolutely zero understanding of Scottish football far less Rangers, to the ditching of arguably the club’s best defender in Clint Hill, to admitting he and his team ‘did not understand the game’, to the over-indulgent media interviews which say a ridiculous amount too much, to the bewildering ‘local Scottish assistant’ nonsense where the picked man was barely local and definitely not Scottish.

It does not look good folks.

In fairness, Pedro Caixinha did not appoint himself; this is the board’s sword. If this (inexplicable) managerial appointment does not work out, the board 100% fall on it. No one wanted Pedro – let us make that abundantly clear. Let us remove our blue tinted specs, and our natural willingness to give the man a chance; no one wanted Pedro Caixinha to be the new manager – it was Tommy Wright, or Derek McInnes, or McLeish, or Souness, or McCall, or even Alex Neil; but instead the board opted for the bizarre choice of Caixinha.

Do not get me wrong – I actually like the man – he is an intelligent and decent guy, and unlike his predecessor has not acted with arrogance or spouted lie after lie; but he is not Rangers.

This is not me sending him to the guillotine before he has had a chance to build his own squad – but then do you have to build your own squad to know Jon Toral is not a defensive midfielder, or that starting with two rookie central defenders is a bad idea?

I can see worrying echoes of Bread Boy in the way our current manager fails to grasp what Rangers means, or how to manage us. It is truly a fish out of water right now.

Last night he said he and his team did not understand the game:

DID NOT UNDERSTAND THE GAME.

Going by the starting XI, the formation, and the subs, I would have to agree. In fairness to him the game did switch a degree of momentum when he finally elected to correct his mistake and hook the absolutely ghastly Toral off and replace him with the impressive youngster Jamie Barjonas, but conceding he and his men lacked basic understanding of the match is a deeply worrying comment.

The harsh reality is few are convinced by all this; even the names linked in the press as new signings are hardly the stuff of rebuilding a Rangers we all admire. Sure, Ryan Jack is a decent recruit once it is formalised, but it is a rare exception – from Ben Henaghan to Rashid Sumaila, to a worrying number of aged old defenders, to a general lack of midfielders or strikers, Louis Moult aside – it feels very much like replacing Warburton’s old rubbish with Pedro’s new rubbish.

On last night’s debacle he said:

“We could not cope with the pressure the opponent was putting on us and we need to deal with it when that pressure is coming. We lacked that and especially the three midfielders were being pressed and chased all around the pitch which meant we left more spaces.”

Is Pedro actually admitting his game plan was a mess? That his midfield tactics were completely wrong? I do respect when a manager concedes he got something wrong – but it is starting to become quite a regularity.

And added on top of the absolute weirdness of everything else it really is not reassuring. As previously stated, the board picked this man. They went against the wishes of nearly every Rangers fan and ignored a bunch of more desired candidates.

In the coming months I would love to be proven totally wrong on this; that this risky move pans out the way we hope it does, rather than fear it does. We need Pedro to work out. We need his new signings to work out.

But we will equally not sit idly by as such obvious mistakes, weirdness and plain amateurishness plays out in the media and on the pitch. We will not pretend this stuff is not happening.

We can only pray it all works out, because the opposite does not bear thinking about.