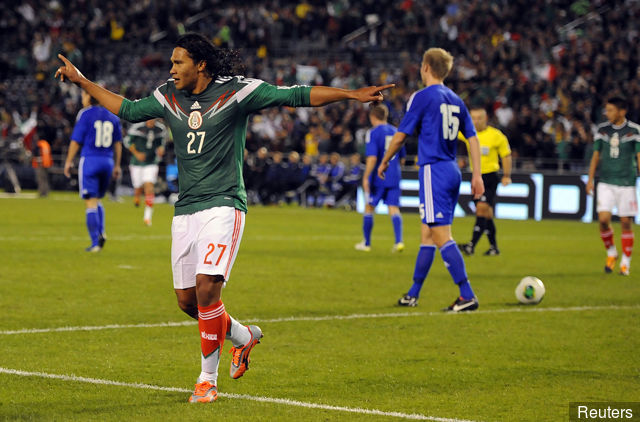 Rangers are currently being linked with a massive host of players, both UK-based and abroad. Here, Ibrox Noise takes you through a cherry-picked selection of those you may be less familiar, with everything you did not know about some of the gents Pedro Caixinha is said to be eyeing up.

Carlos Peña, who turned 27 in March, is a highly rated 5’10” midfielder who plays for both C.D. Guadalajara and the Mexico National team.

In May 2011, Peña joined Ascenso MX side Club León. He appeared in 31 matches during his first campaign with Los Panzas Verdes, as the club was promoted from the play-offs. In 2013–14 Peña scored 12 goals, as León was crowned champions of both Apertura and Clausura tournaments (the latter by defeating his former club Pachuca).

On 6 December 2015, C.D. Guadalajara announced they had signed Peña with a reported transfer fee of $8 million. Peña scored on his debut against Veracruz on 10 January 2016. Despite a slow start to the Clausura 2016 season, Peña scored seven goals in 17 appearances. However, he has received criticism for missed penalties during really crucial matches.

On December 7th 2016, it was announced that Pena had returned to Club León after playing a year for Guadalajara.

Pedro Caixinha knows him well from his time as manager of Santos Laguna and understands that Carlos had a few off the park problems last season, but feels that bringing him to Ibrox with his football ability will be a huge bonus for a new style Rangers team. His football skills are not in question and he has won 19 caps for the Mexico International team already and played in the last World Cup in Brazil.

According to a newspaper report (so it must be true) that Rangers are also chasing 23-year-old centre-back Fabio Cardoso the 6’ 1”, Vitoria Setubal defender who has reputedly three years left on his contract and is likely to cost £1.25million for Rangers to have any chance of gaining his services.

Despite only being 23, Cardoso has already made more than 60 appearances in the Portuguese top-flight, as well as a further 55 in the second-tier. He is a Portugal Under-20s international, and has been capped four times by the side and Cardoso has also been called into Rui Jorge’s Under-21s squad.  However he is yet to make an appearance for them.

Jamie Walker, who turns 24 in June, has caught the eye of the Ibrox scouts with his outstanding and consistent play last season. He is a wide left-sided player who made great progress through the Jam Tarts’ ranks since he was only 10 years-old.

He is from Sighthill, Edinburgh and operates mainly as a winger, but can also play in a deeper wide midfield role, especially in the difficult away games when he can quickly turn defence into attack. He is no shrinking violet as he also knows how to look after himself on the park by gathering 8 bookings last year.

Jamie scored 15 goals in 39 games for the Tynecastle side with an excellent eye for goal. In season 2015-16 he played 27 games and scored 7 goals and in season 2014-15 he played 35 matches and scored a very respectable 11 goals. That is a very decent scoring record that would probably be improved playing in a much better team like Rangers.

Ben Heneghan, the 23-year-old 6’ 3.5” strong and composed Fir Park defender who is regarded as being decent on the ball looks set for an extremely bright future if Rangers follow up their initial interest in signing the lad.

Ben is from Salford and was signed by Mark McGhee for the Steelmen after two good years with Chester.

He has another year left on his contract and the Fir Park club, who are always a selling club, admit they would have to accept a fee of around the £500,000 mark.

Ben began his professional career with Everton and initially operated as a right-back before moving into his preferred central defensive position, before switching to Stoke City. Following his release from the Britannia Stadium at the end of the 2013-14 season, he signed for Chester after impressing on trial.

He has performed well in the SPL for Motherwell and deserves to move on to a much better club, to improve his full potential as a top class centre half.

Liam Lindsay, the 21-year-old, 6’ 3” Partick Thistle centre half is reputed to be interesting Rangers to become part of the new defensive team. If the Gers want to land a tall Scottish defender, then there may be few better options out there than this one, and at just 21, he could be the long-term centre back the club are looking for – if Caixinha is given enough funds to complete the deal.

Lindsay has come through the ranks with Partick Thistle, and has now racked up more than 70 first-team appearances for the club, and he has scored an impressive seven goals this term and the ‘Gers could be keen to add him to their defensive options this summer.

A fee of around £500,000 could secure the services of Lindsay, and with English clubs interested, Rangers may have to move quickly to land their man.

Yesterday, Fox Sports from Mexico claimed that Carlos Peña will be moving to Rangers this summer. There was no ‘if’ about it, Fox Sports treated the Ibrox move as a fact.  Another follow up story today it claimed that although it’s not official, the deal is ‘practically done’.

But the most interesting information on their update is that Rangers manager Pedro Caixinha would be keen on signing two more players from the Mexican league, where he worked between 2013 and 2015.

Fox reporter Francisco Montes claims that Javier Abella and Eduardo Herrera have been both requested by the Rangers manager. Abella, is a top class 23-year-old right-back, who has already played under Caixinha at Santos Laguna, having made his first team debut under him.

Herrera, however, would be a more unlikely transfer. The striker has just joined Veracruz, and according to Fox Sports, there are ‘fewer possibilities’ for Rangers to sign him, although the interest is real.

The Scottish Premiership could be getting a Mexican feel if Caixinha gets his way.

Naturally this list is far from exhaustive, with the likes of Bruno Alves and Steven Naismith in there too, but we will see what other names crop up. We are sure they will.