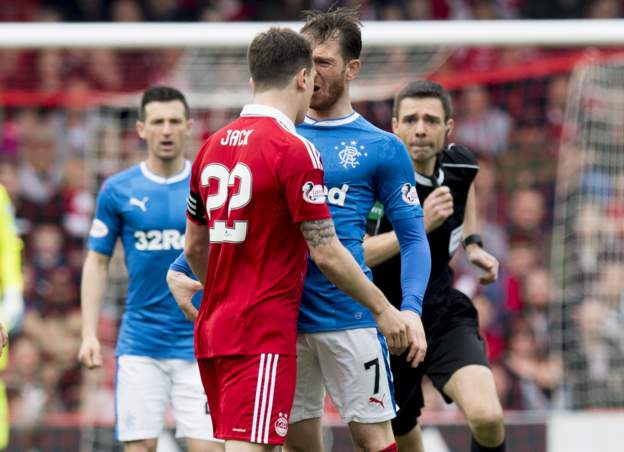 If Sunday’s visit to Aberdeen highlighted one thing more than any other, it was the differing fortunes and qualities of Rangers’ two Joes.

When the Bread Man made the inexplicable decision to shell out a whopping near-£2M on Preston-North End’s Joe Garner last summer, there was confusion all round. Everything in the 28 year old’s CV pointed to pure average, with a litany of wasted time in the lower leagues of the EFL and a mediocre goal-scoring record to show for it. No significant team was willing to give him the light of day in their first team, and his general ability pointed to England’s lower leagues being his level.

There is the horrible inescapable truth that Joe Garner, for a striker, is not very good at being a striker. In fact, his performances for Rangers, the occasionally decent holding display aside, have been utterly pathetic with barely a goal scored amongst it all. When one picks apart at his ability, one struggles to unearth anything he is actually competent at, apart from his admittedly reasonable aerial ability. He does not score, he does not create, he does not come deeper to help his midfield, he does not link play, and he generally looks completely lost.

In fact the one thing he truly excels at, and you knew I was coming to this, is being a petulant, crude, cheating little crybaby. I am quite sure off the pitch the man is a perfect gentleman, so this is nothing personal (got no axe against the man himself), but on the pitch he is ghastly and has soured Rangers’ shirt more than once. That episode on Sunday with Ryan Jack summed the player up – yes, Jack certainly did meet his head, but the dive that resulted from it was embarrassing – and he is only too happy to stick the boot in and kick opponents while laughing.

It is not any Rangers conduct that I know, and I cannot recall disliking a player’s style more than I do Garner’s. Think to how Wilson shrugged off a broken nose and played on – as much as this endeared him more to Rangers fans, it was also honest. An honest moment with a player taking it on the chin, making no fuss, and just moving on. Compared with Garner it was night and day.

And to the other Joe of the story? Joe Dodoo of course. This ex-Leicester striker has been absolutely abominably wasted since arriving at Ibrox, and has rarely done anything beyond giving a solid account of himself when making one of his rare appearances. His cameo at Pittodrie quite simply changed the game – his assist for Kenny Miller’s second was composure personified, while his own goal was clinical as a surgical knife, and equally as cutting. It was a damn shame he smacked the bar for he deserved a second.

Young Dodoo has got his head down, never moaned about being on the bench, and behaved extremely well in his time at Ibrox, unlike his namesake elder. He has also given his manager a selection headache. Well. I say headache – for me it would be bewildering if Garner starts this weekend, while Dodoo has absolutely earned his chance to start regularly, with Thistle recent victims of his as well as Derek McInnes’ men.

(Thankfully) we have, Joe Dodoo too.