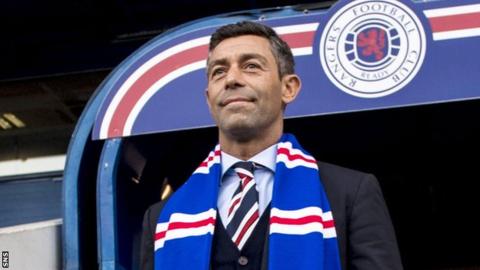 Pedro Caixinha takes over as Rangers boss with the team an
astonishing 33 points behind Celtic after just 27 games and obviously has no
chance of getting anywhere near them. The big test in his first months in
charge will be trying to make up a six point
deficit on Aberdeen and finish in the top two. Then the rebuilding job
begins in the summer as the gulf between the Old Firm clubs looks huge right
now.
Any Rangers fans expecting the club to win the league in
their first season back in the top flight were always being a bit too
optimistic, but few would have expected them to be so far behind. Celtic have
been strong this season, painful as that is for Rangers fans to admit, after
making shrewd signings in the summer transfer window and bringing in Brendan
Rodgers as manager. But Rangers have made it all too easy for them, losing 5-1
and 2-1 in the two games between them and succumbing in the league cup too, albeit signs of a fightback last weekend were a welcome change.

Caixinha could have been thrown straight in at the deep end when
Rangers faced Celtic at Celtic Park right at the start of his tenure. They were
not given much of a chance. A 5Dimes review
of the odds showed Rangers to be huge underdogs. To see them priced at 17/2
for an Old Firm derby would have been unthinkable a decade ago. But it is a
reflection of the times, a result of their demotion to the lower echelons of
Scottish football and their lack of time to properly adjust to life back in the
top flight this season. Celtic were just 2/5 to win it, and few would have taken the
bookies up on such low odds.
Many, however, may have fancied a speculative flutter on Rangers at
those massive odds and despite not winning, hindsight showed it was not a lost cause. A new manager often has the effect of galvanising a squad and we will hopefully see that come Saturday.
What would be arguably as impressive, although not as exciting,
would be to overhaul Aberdeen in second place. There are just six
points in it, but Aberdeen are in fine form.
Their defeat to Hamilton
Academical suggests they have serious weaknesses though, and Rangers can
exploit that between now and the end of the season if they unite under their
new boss.
Aberdeen are clearly in the driving seat and in the betting
without Celtic line, they are 1/4 favourites, with Rangers out at 11/4.
That 11/4 looks an interesting bet right now. The two teams
meet on April 9 in what could prove to be a big six-pointer. If Rangers can win
that, get a result against Celtic and win their games against Hamilton,
Motherwell and Kilmarnock then they would seize the momentum and could go on
and at least finish second.
That would give the players more belief over the
summer, and hopefully the recruitment process will be a lot better this time
around so that Rangers can genuinely challenge for the title next season.