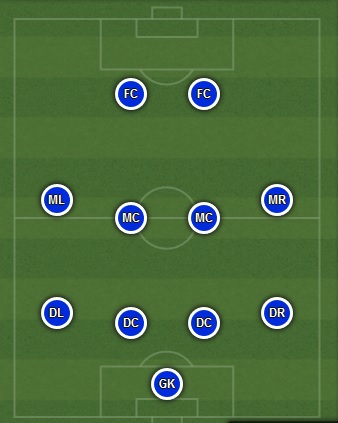 If we overlook the increasing division regarding Mark Warburton’s position at Ibrox, and get back to plain football, the most commonly-asked query among fans is why the boss persists with a formation that clearly is not working.

Warburton has advocated 4-3-3 his entire managerial life, and has robustly defended it in his time at the helm. And to his credit it worked fairly well in the Championship, with his Rangers side coasting to promotion with room to spare.

The problem is fans’ accurate insistence it does not work in the SPL, and results and displays have borne that out. Rangers have looked static, idea-less, and incredibly predictable, seeing many supporters to press for an essential change in formation to a more traditionally-Rangers-esque 4-4-2.

This formation was used to great effect by Souness, then his successor Sir Walter, before Dick Advocaat flirted between it and 4-3-3, only for Eck to switch more permanently to 4-4-2, before PLG’s ill-fated insistence on 4-3-3 led to his demise as Sir Walter returned on his horse and restored the more familiar setup.

Even Rangers under Super in 2011 used 4-4-2 to great effect until Steven Naismith got injured and it all unravelled horribly. So surely Mark Warburton is willing to try something a bit different?

Well, there is a slight problem with Rangers going to 4-4-2. Nine of the positions are fine; the traditional back five, the striking partnership up front and the two wingers.

Rangers can easily field any four-man defence, with McKay or Forrester on the left wing and Windass or O’Halloran on the right, with Garner and Miller or Dodoo up top.

The problem emerges when Warburton looks at his midfield pool to pick his central midfield. Thinking back to Ally, he had Steven Davis and Mo Edu – the creative but strong attacking midfielder in the Irishman who could still defend a bit, and Edu, the tough enforcer who broke things up and attacked a bit.

Back further and it was Barry Barry and Albertz, or Van Bronckhorst, or Reyna. And for the slightly older Bears among you Ian Ferguson (and Derek Ferguson) with Trevor Steven filled Rangers in the middle.

Now back to the present day; Halliday, Holt and Crooks. Those are Rangers’ options right now. It is not even so much the quality of the players, and none of these stand out on that front as it is. But the simple fact none of these guys fill the attributes criteria for either of the slots needed in a two-man midfield. None are playmakers, none can put their foot on the ball and dictate flow, and none are known for being Ian Ferguson-type enforcers.
The only real candidate Rangers have is permanently injured in Jordan Rossiter, and even then it is an option which does not convince.

The problem ultimately is Warbs’ summer business. The man signed and built a 4-3-3-based squad and did not intend to use any other system – he truly believed he would be able to concoct a group of players that could handle the SPL in that formation, and was not interested in a plan B.

Hence while Rangers have the players for a 4-3-3, obviously, the more appropriate 4-4-2 is far harder to implement with the personnel Rangers have. Many might say what about a 4-2-3-1 and yes, there is a chance of that, but it critically requires Rossiter’s fitness to sit in front of the back four alongside another, and the only candidate to partner him is Crooks who clearly needs time. Neither of these are guaranteed and as such Rangers cannot gamble. The only other player Warburton can use there is Halliday and however long he ultimately plays in defensive midfield zones, he will never be a good defensive midfielder.

Then there is 4-1-4-1 but it still relies on one of Crooks or Rossiter being fit or in form, neither of which is a reality right now.

And this is the base problem; Rangers are built for a 4-3-3 – the only solution under Warburton is a new approach in January with some patriarch leaders in midfield who can give the option for a 4-4-2 or indeed other formations (this argument is separate to the one from fans demanding a better defence and strikers). Warburton put his eggs in the 4-3-3 basket but it has not worked in the SPL, and he needs other options if he is to prove myself and others wrong about his ability to manage Rangers.

It is in everyone’s best interest that he succeeds.