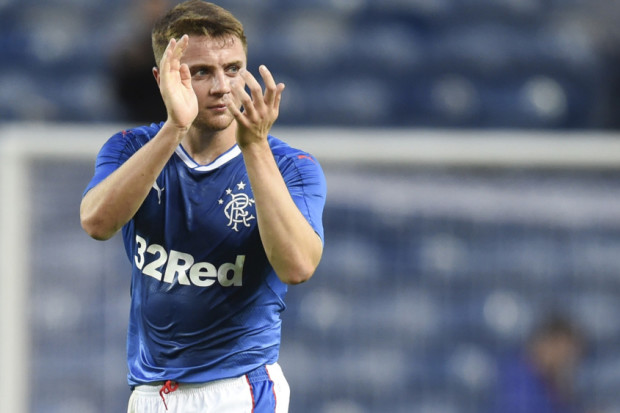 Mark Warburton was quoted as saying “a week to 10 days away” for Jordan Rossiter at his last press conference on the 29th, essentially presumably leading to the young defensive anchor’s return by the time Rangers travel north to Caley.

Rangers have been patchy in his absence, with a dreadful loss at Celtic Park preceding a slight glimpse of some form, and in Andy Halliday’s defence he has done a pretty solid job filling in there with Matt Crooks apparently not truly deemed as fully ready to hold down that slot, and Joey Barton’s ban eliminating him from selection.

This leaves Rossiter as having a real opportunity to regain fitness (he has been on the treadmill) and assert himself in that deep midfield role, a position he has done nothing but impress in wherever he played.

While his time at Anfield was decimated by injury, his impressive displays drew comparisons with Steven Gerrard, and he has equally impressed for his national side at youth level, not only doing the business on the field but earning the captaincy too.

And at Ibrox his performances, all-too-brief though they have been, have earned comparisons with one of Rangers’ favourite sons in Barry Ferguson, blessed with the same kind of raking passing, balance on the ball, willing to roll his sleeves up, and sheer passion the Clyde manager had in his playing days.

With uncertainty surrounding Barton’s future, Halliday playing out of position and the lack of assurances that Matt Crooks will be establishing himself in the midfield any time soon, there really is a window of opportunity for young Jordan.

There is a vacancy for defensive midfield – by signing Barton, Crooks and Rossiter Rangers fans truly believed that position would be the least of our problems this season, having been a major Achilles heel last, but the issues bizarrely persist.

Hence if the Liverpool lad can nail fitness, and assert himself in the team like he is more than capable of doing, Rangers’ tribulations in that position would surely come to an end.

His injury issues are a concern, no denying it. His career has been hamstrung by the inability to remain, as the American sporting pundits would say, ‘healthy’ for any serious length of time.

But his ability is unquestionable and Rangers have a real gem on their hands if they can just keep him in one piece.

As for Halliday, he is proving himself a vital cog in Rangers’ engine room – whether at DM, CM, or AM, he is a useful soldier to have who will put himself where it hurts for his club – hence I am not advocating ditching him. But he is not the best option for DM, and that has to be accounted for.

Rossiter, of the tangible options available (I cannot count Crooks as yet such is his failure to break into the first team at present) is the best one.

Let us see if he proves himself capable long term where he is needed at Ibrox.