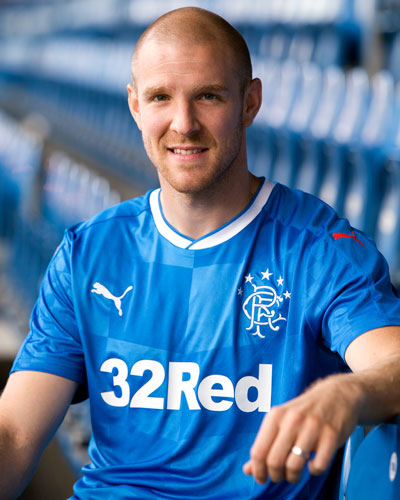 After a two-week trial period, Rangers’ management team finally offered 6’ 3”, 31-year-old experienced centre back Philippe Senderos, a one-year-contract. With Mark Warburton desperate to bolster a defence that is susceptible to losing goals at corners, they made their pitch for his services. The 57-cap Swiss internationalist was deemed to be the quality defensive player the Ibrox club were desperate to add to the squad. Philippe is another free agent signing and is excited to join such a world-wide club in their quest to win this season’s Premiership.

Ex-Swiss international team-mate Ramon Vega is sure Senderos can be an Ibrox hit, and says,

“He is a defender who likes to dominate in the air and is a good organiser of the back line, and has a good eye for the game and can read situations well. I wouldn’t say pace was his strong point but he can beat that because he positions himself well and is good on the ball. He has played at some top clubs and you don’t do that unless you are a top player.”

He has a varied CV in a career that includes a 13-year period in English football, playing for Arsenal, Everton, Fulham and Aston Villa. He also had spells at AC Milan, Valencia and the former Servette youngster enjoyed a six-month spell with Switzerland’s Grasshopper Club Zurich, and now he is thrilled to be back with a big-time club.

Senderos, the £2.5m signing from Servette, joined Arsenal and came third in the Club’s Player of the Season poll at just 20 years old. His tenacity, aerial power and will to win, all proved to be valuable assets for Wenger’s side. The following season he was part of a back four that kept a record 10 clean sheets en route to the Champions League Final. Senderos helped see off Real Madrid, Juventus and Villarreal before being selected by Switzerland for the World Cup in Germany.

The Swiss defender landed a prestigious loan move for the 2008-09 campaign at the famous San Siro Stadium with AC Milan who had been impressed by his two displays against them just months earlier.

The impressive performances of William Gallas and Thomas Vermaelen meant reduced first-team chances when he returned to Arsenal, but he did make 117 appearances for the Gunners, before he moved to Everton on loan in January 2010. When the loan ended, Senderos decided to join Fulham on a three-year free transfer deal. As bad luck would have it, on 09 August, while training, Senderos tore his Achilles tendon which kept him out for six months. In spite of his injury, he still managed to play in 65 games and on 01 March 2013, Senderos signed a one-year contract extension to keep him at Craven Cottage.

On 31 January 2014 Senderos joined Spain’s Valencia from Fulham just hours before the transfer window closed. After only four months in Spain and playing in 11 matches, he wanted back to the Premier League and joined Aston Villa on a two-year deal.

On 27 January 2016 Senderos left Aston Villa by mutual consent and only two days later he joined Grasshoppers Club Zurich on a 6-month contract deal and featured in 14 appearances. During his last game on Mon. 16 May ’16, he was taken off after 8 minutes through injury, and hasn’t played a competitive game since.

His contract ran out on 01 June 2016, and his agent wanted him to go back to the UK believing that at only 31, he had another two or three years at the top level left in his locker.

Now it is up to Senderos to prove that Warburton was right to sign him.