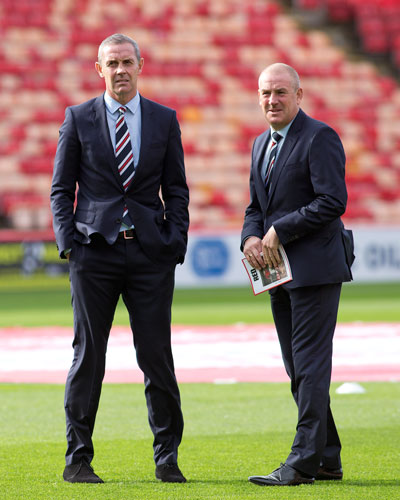 This site is currently under a touch of siege right now for ‘overly negative’ reporting. That we have been far too harsh on the team, management and regime and do nothing but moan, complain and whine.

That we are not ‘supporting’ the club during a tough time in our long and glorious history, and the negative slant taken is tiring some of you. We certainly respect that view, of course, but the truth is infinitely more complicated and certainly not the black and white some would have you believe.

The fact is any fan who blindly supports their team, manager and regime regardless of what is happening is entitled to do that, but they equally do not claim a monopoly over the definition of ‘supporter’. No one does, including us, but it is our contention that the truest form of support is caring when things go wrong enough to want to object and change it.

That if results and performances are not good enough, we have the right to call it for what it is. Indeed, when we are positive about events at Ibrox we get ‘Level 5 Poodles’ accusations thrown our way, and when we take a more grim angle on them we are the ‘worst kind of supporter’ and ‘too negative’.

Those who complain we are too negative probably were not around last season when we did little but praise Warburton and the players, and maybe even went a little overboard in our lyricisms of the new signings this summer.

But is that not what a Rangers and indeed football supporter does? Praises and experiences joy when things are great, and gripes and moans when they are not?

Support does not, in our opinion, have to mean keeping quiet when you believe things could be better; indeed a logical conclusion could be drawn that according to some fans reading this site, supporters at Ibrox (or any football ground) should never groan, sigh in exasperation, boo, or essentially express any negative emotion as that is ‘not supporting the team’.

All of this, of course, is just our take on it, and it is because we as a site love Rangers so much, own season tickets, invest cash in other ways and follow every match home and away be it in person, on TV, or through Rangers’ own TV service that we want Mark Warburton and the players to turn this dreadful slump around and prove they have what it takes to ply their trade at the famous Glasgow Rangers.

Facts are facts, since April 17th and that glorious Old Firm victory at Hampden, Rangers have won two league matches. Two league matches of a possible 11. That, statistically, might just be the worst run in Rangers’ 143 year history – to get the exact numbers a look at Chic Sharp’s spreadsheet might do the trick, but two league wins in approaching half a year is an almost impalpable slide.

Even before the league was actually won, Rangers’ form was dreadfully on the wean, with a miserable loss at Easter Road, being held by Alloa on the afternoon of the title party before bottom-feeding Livi rather comfortably won at Almondvale.

And despite all the summer influx of 12 new players including the likes of Joey Barton, Jordan Rossiter, Josh Windass and Philippe Senderos, players supposedly a significant upgrade to the existing squad, that trend has simply continued with a truly awful start to life back in the SPL.

And it is our right to express genuine concern over this pattern.

For all we know, Saturday will kick start the season at last with a sterling display v Partick, and a solid run will hike seventh-placed Rangers up to the top four and build for the rest of the season. Nothing would make us happier.

But we reserve an entitlement to express criticism over current form, even if other sites, groups, and individuals would rather remain far more positive about it.

That is completely up to them, and we respect all views (apart from slurs and insults, of course) which contradict ours.

But all we want is to be proven wrong. Our worries unfounded.

We want Mark Warburton to prove to us he has what it takes to be a Rangers manager in the SPL.

We want the players to prove they are good enough to represent us as a club on the pitch.

Is that so unfair?