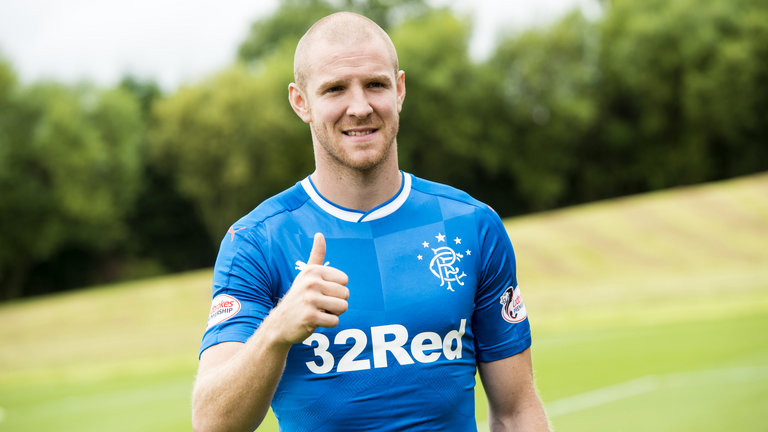 Mark Warburton does not have his troubles to seek right now. Very little positivity is coming out of Ibrox right now, with Rangers rightly placed in seventh in the league having had a frankly woeful start to life back in the Premiership, below the expectations of a great number of the fanbase who hoped their side would be fighting at least in the top four.

However, to add to the string of subplots going on in Govan at the moment is the curious situation with Philipe Senderos, a 50+ Swiss cap who arrived in Glasgow’s South Side to train and win a deal all those many weeks ago, when Rangers were in dire need of an experienced and high quality head at the back.

Indeed, with experience of Highbury (as it was then) then the Emirates, before adding the San Siro and the Mestalla to his collection, it is fair to say Rangers were pretty sure they had acquired a fairly marquee signature in the form of the former Villa stopper, despite the bizarre Joleon Lescott saga getting in the way.

Indeed, the 6ft colossus strolled through his debut at Windsor Park then was not a huge shock to be included for the Old Firm clash at Parkhead.

And despite playing fairly well alongside the disastrous Rob Kiernan, two admittedly idiotic yellow cards saw him sent off in that match and since then the 31-year old has been completely frozen out of first team affairs, finding himself permanently benched.

No one is condoning his poor conduct in Glasgow’s East End, and he was rightly castigated by many for it. But with Rangers’ comical defending costing the first goal at Pittodrie, one really has to wonder two major things:

1: Why has Senderos been as good as frozen out already? Surely it cannot be due to his indiscretions at Celtic Park?

2: How can any manager justify signing a player of his supposed quality at the fairly handsome wage he will surely be on only to reject him to the bench?

Danny Wilson has by no means disgraced himself this season, even if he wildly misjudged the bounce at Aberdeen to expose Hill totally, and Hill himself has actually been half decent in the past two games, while Kiernan has been completely absent from first team affairs.

But sitting on the bench we have a potentially excellent defender who is more than good enough for this level and who did absolutely everything by the book in proving himself worthy of a contract while his prospective manager was flirting with a firebomb in the shape of Lescott, who is equally being well paid, and he wastes away.

It is a bizarre state of affairs, and it does further question the signing policy and Warburton’s judgement. Right now, Rangers have potentially £30-40,000 worth of wages sitting either on the bench or banned entirely, with Barton’s own salary reputed to be worth around £1M a year (roughly £20K a week) and to call that irresponsible is putting it mildly.

Niko Kranjcar too, who has not been a resounding hit and is a permanent sub, was a large investment that is not exactly paying off, while Jordan Rossiter, impressive though he has admittedly been on the pitch, sits out medium term injured for the umpteenth time in his young career, questioning the decision to sign him for what is likely to be a decent wage too.

Every club has its injuries, its bad signings, its mistakes; but only TWO of Rangers’ summer signings started against Aberdeen on Sunday (Garner and Hill) and only one further came on as a sub (Kranjcar, to little effect). And it is all costing Rangers significant money which is not looking like wise overheads at present.

Whatever the cause, for only three of 12 new signatures to play a role in such a critical match has to be a question for Mark Warburton and Frank McParland.

Even Josh Windass has had career-long injury troubles, and Rangers knew Matt Crooks was a long-term absentee from earlier this year; added to the Senderos oddity, the Barton banning and various other quibbles, what exactly is going on behind the scenes these days at Ibrox?