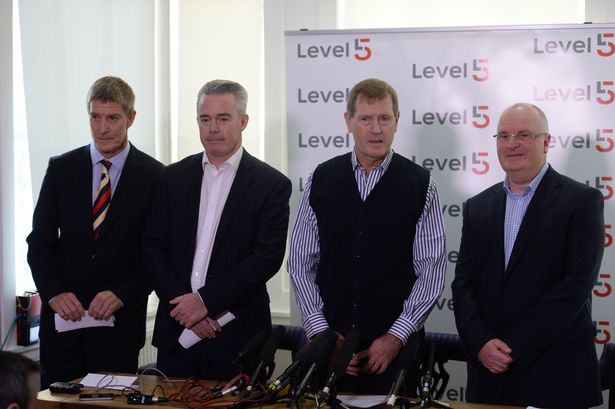 Let me start this piece out by clearly illustrating the positive comments this site has made on the King regime since it took office last year; we have praised the appointment of Warburton, Weir and McParland, we have waxed lyrical about how the board has sought to restore fan unity and the similar restoration of pride in our Club.

We have rightly bigged up the infrastructure improvements, and we have even conceded our own doubts prior to their election victory in 2015 were unfounded. Last but not least we absolutely loved the post-Cup final statement which defended our supporters unconditionally and tore into the bitterness of Scottish football without mercy.

In other words, Ibroxnoise.co.uk has admitted, happily, that this board have got a lot of things right in the colossal task of turning Rangers back into the power we know they are.

However, the early mistake of praising a certain Rangers-hating publication for its ‘courageous journalism’ has lingered with yours truly for a very long time, and has never sit well with a great many number of supporters for the same reason. It suggested a group of men horribly out of touch with the support.

But everyone makes errors, and many were willing to move on from that one for the betterment of the Club – after all, Rangers are bigger than the board, the management or even the players; Rangers are the fans and the institution. Rangers are a way of life for hundreds of thousands, even millions, and most are reasonable enough to dismiss a fallacy if the grand picture is Rangers’ progress.

However, over the past 48 hours Rangers’ board has heavily disrupted its progress with a calamity of epic proportions, one which has set back fan unity months, maybe even years, in the context of unity with the Club.

In fact, this episode has united a great majority of our supporters in agreement and disappointment, possibly disgust, at the board’s actions and complete lack of fairness and rational judgement in the position they have taken, including those who heavily advocated their election win last year.

For those unaware, a Rangers supporter was banned by the board following those infamous Hampden events in May. A supporter by the name of ‘John’ whose condemnation letter can be seen below. 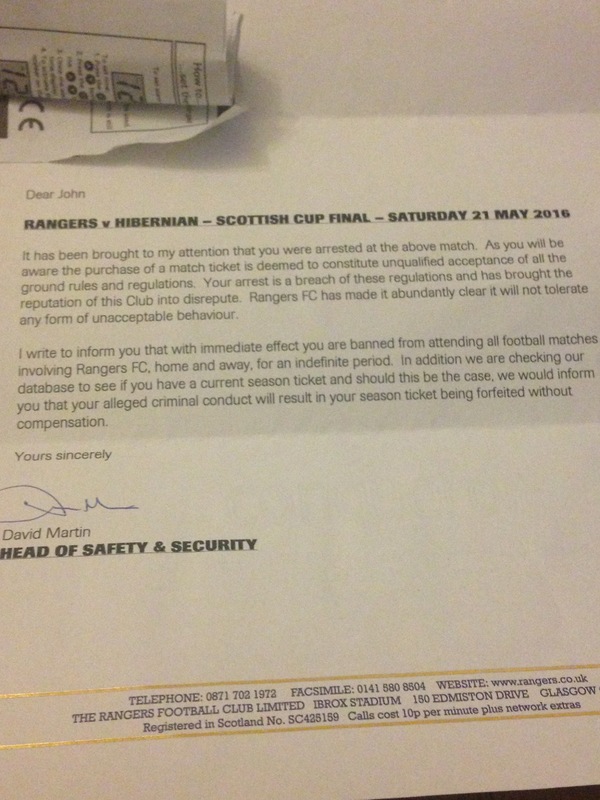 No one would suggest the law cannot apply to Rangers fans, of course it does; if a Ranger has done something wrong, it is only fair punishment should be delivered. The problem with this knee-jerk and despicable ban is it absolutely flies in the face of both the post-final statement the same board made, and of complete decency and support of the fans by the board they elected. Furthermore, it worryingly bans the individual before he has even been handed a verdict by the courts.

The board claim they will rescind the ban if he is found innocent, but this unsavoury incident has been extremely poorly received by the support, and in short, the board have got this one badly wrong.

Their ‘representatives’ among the support, the newly-formed (but really RST by any other name) Club1872 failed miserably to defend John either, suggesting a real lack of fan representation at board level which is able to defend supporters.

Remember what that statement earlier this year said:

“We acknowledge that a tiny minority of Rangers fans also encroached on the pitch but only after having been faced with prolonged and severe provocation and in order to protect our players and officials who were being visibly attacked in front of them. Any club’s supporters would have done the same.”

Complete and unilateral support of Rangers’ supporters actions on the pitch by the board way back when; ergo, to now ban one of them for those actions is beyond the pale and unacceptable. The hypocrisy is completely laughable.

There is no reason why this fan could not have been viewed as innocent till proven guilty, and if deemed so, then the ban ensue. Instead, both the board and Club1872 have hidden behind protocols from a league hierarchy they are meant to despise, without even vaguely attempting to defend the gentlemen or his rights.

Many fans’ reaction to this distasteful series of events has been to compare this to the Murray and Bain regime, and suggest that nothing much has really changed from that era. Hard to say whether that is even a valid argument, but the entire episode transcends disappointment.

Rangers’ board has not made a lot of really bad gaffes since they took charge; that ‘courageous journalism’ was one, and this is far worse.

Everyone is human, and prone to fallacy; for the sake of decent and unity, the men at the top really require to rethink this policy pronto, rather than behaving in a manner which has truly riled up the wrong set of supporters.