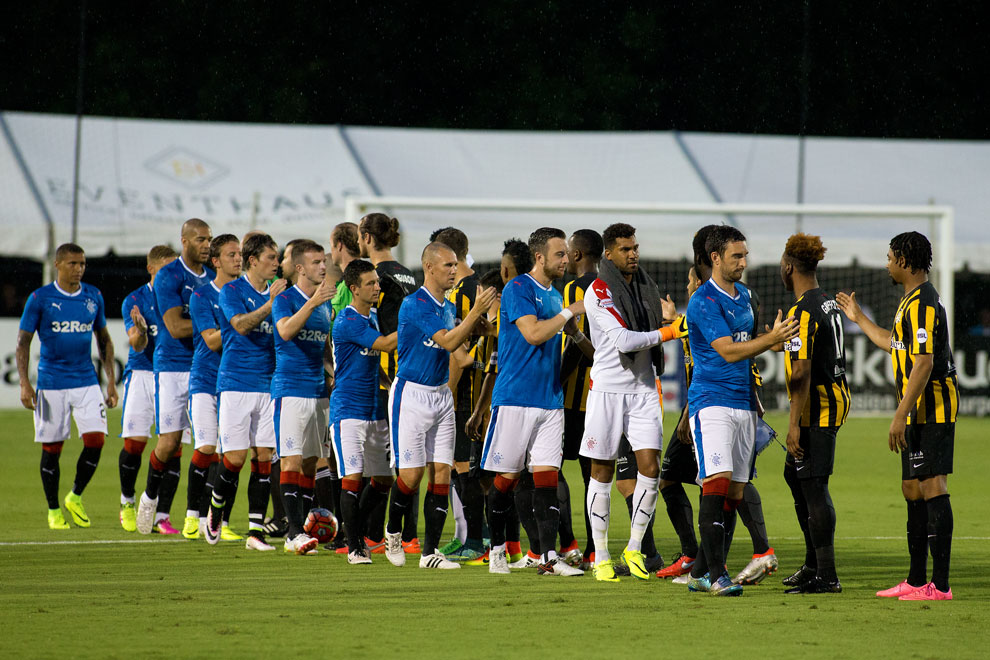 Mark Warburton’s new-look Rangers side finally got its season underway, albeit in a friendly, giving fans and management a chance at long last to see what is in prospect at Ibrox next season.

Under near-90 degree temperatures and following a local thunderstorm in Charleston, South Carolina, the action got underway in earnest around 8PM local time with Warburton electing to give a debut to only one new signing; Josh Windass. Trialist Oguchi Onyewu did also start the match, though, giving management a chance to size him up.

So what did we learn from what was, ultimately, a very comfortable 2-1 win in the USA?

Josh Windass not only fit into the XI like a glove, like he had been playing with this group of players for years, but that he looks the business. Those ‘rival’ fans attacking Rangers for signing such a ‘lowly’ player would surely be eating their words as young Josh ran the show, with busy work in midfield and deft touches all over the place. He scored one excellent goal, should have scored another, and even helped out in deep midfield as well. For a ‘lowly League 2’ player, Windass looks like he was born to play for Rangers.

Trialist Onyewu stood out. He did not have a mountain of work to do, true, and was maybe caught slightly sleeping for the hosts’ solitary goal, but otherwise looked robust, assured, strong, and hungry. A slightly nervous start, evidently desperate to impress, faded as he grew into the match and Rangers could do much worse than to sign him up. For a player without a club over the past 18 months, he certainly looked sharp enough.

Clint Hill was not scheduled to start this one, but an early injury for Danny Wilson saw the former QPR stopper appear regardless, and his display was mixed. He was quiet, looked to lack presence, and was caught off-guard early on when he simply did not seem at the races as Battery nearly scored. He was unfairly penalised when a decent enough challenge was adjudged a foul, and did not do much else wrong, but his performance lacked the impact Onyewu’s made. Still, plenty of time for him to improve, and he surely will.

Matt Gilks appeared for the second half and will be disappointed to have been beaten near-post, regardless of how unexpected and sharp the shot was. But he probably had a better half than his counterpart Wes Foderingham did in the first, with the ex-Swindon ‘keeper looking a bit nervous and off-colour. At one point he paused in front of the ball attempting to block rather than the obvious attempt to advance and smother. He knows he has competition now and rather than it pushing him on seems to be having the opposite effect.

Martyn Waghorn looked a bit off as well, not really getting into the match and guilty of some loose possession. Rangers’ talisman still has not truly returned from injury yet, and looks some way off his normal self. Perhaps my colleague Richard’s suggestion of him playing deeper is not the worst notion. But then, Rangers certainly do not lack options in midfield.

But the final word has to be for second half sub Michael O’Halloran – the MOH who showed up in the second half was the one who took us apart last September so effectively – the same one Warburton chose to invest half a million in, and he is justifying those comments saying he needed a pre-season. He was sharp, hungry, quick, used his skill brilliantly, and indirectly assisted Windass’ goal. Keep this up and he is like a new signing and will be hard to drop.

Other points to note:

McKay looked to pick up exactly where he left off last season. This lad is developing into a multimillion pound talent at this rate.

Halliday had a bustling match, with some good reading of the play and a better understanding of the defensive midfield position.

Holt was busy, and looked every inch the energetic ‘battery’ he was in the last campaign.

Miller worked hard as always, helping out in defence when needed and always on hand to support.

Tavernier and Wallace were both quiet. Wilson was solid enough.

Disclaimer: yes, this was a friendly, and yes, Charleston are not Real Madrid, but Rangers have stunk in similar friendlies in previous years, such as 2014’s underwhelming tour of the USA, so while we cannot truly judge on such a match, it bodes better this time than it did.