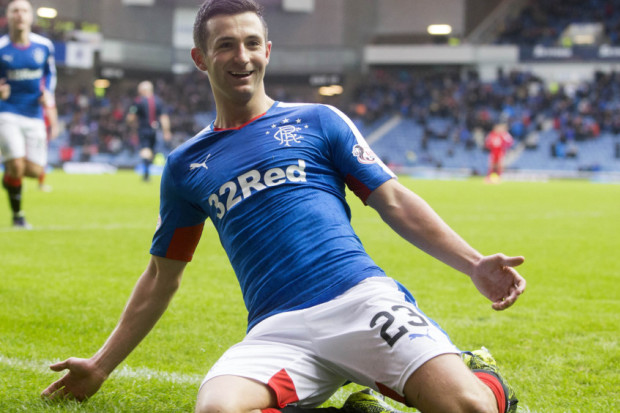 As competition for places hots up at Ibrox, a very curious pattern has appeared in the past couple of matches; arguably last season’s best player, or certainly one of, has not featured in any meaningful way and indeed was mildly criticised post-Motherwell for his display.

That player, of course, is Jason Holt. Rightly lauded last season, Holt was Rangers’ most effective midfielder, with an absolute guaranteed start and a noticeable loss in team form when he suffered injury during the business end of the campaign.

His industry, drive, goals and energy were a sparkling component of Rangers’ success throughout the season, and he was firmly expected to be a guaranteed start this season, including by yours truly.

However, doubts might now be emerging after he was not only overlooked again for a starting slot last night in favour of the increasingly brilliant Josh Windass, but was in fact omitted entirely from the match day squad having been benched v Annan.

Yes indeed, manager Mark Warburton has installed a disclaimer regarding ‘loading’ and effectively wanting to give the whole squad game time, but some players have certainly experience a heck of a lot more loading than others (Wallace, Halliday, McKay have all started every match pre-season) while Holt has barely featured that Motherwell appearance aside.

And, as mentioned, he was rather subdued in said appearance before being hooked off in favour of new signing Windass.

Jason Holt has a fight on his hands. Rangers’ most impressive midfielder last season now sees the likes of Kranjcar, Windass, Forrester et al vying for the creative midfield slot, while last season his only real competition was Law, Shiels and Zelalem – this season it is serious.

And, unfortunately for Holt, Windass has been, frankly, electric, and has thoroughly impressed since his debut – he has two goals already – both clinical finishes, one in that friendly at Battery, and a first competitive strike showing remarkable calm and composure to slot away at Stirling.

Even then, it is evident that Windass himself might not even be first choice, with the aforementioned depth around him to boast of.

It is a problem Rangers want to have – Jason Holt, a fantastic contributor last season, may now have to find another level to maintain a place in the team – he is not starting by default this time round, and sees quality like Kranjcar and Windass arguably ahead of him.

It is up to him to prove his worth, and prove that he can step up and produce at the level Rangers are now expecting. Rangers’ standards, already increasing dramatically last season, are now punching up to another zenith altogether.

It is up to Jason Holt to go with that flow, and show he is every inch as good as his squad rivals.

It is the kind of problem a club like Rangers needs, and Mark Warburton will thrive on.