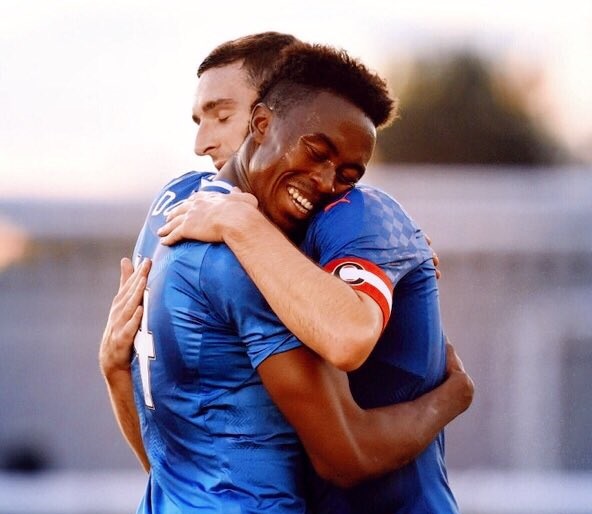 As reported on this site well over a week ago, Rangers finally secured striker Joseph Dodoo on a four-year deal, with just a modest six-figure sum the outlay based on cross-border FIFA regulations regarding U23’s.

Last night Joe made his debut at Ochilview in the Betfred League Cup as a 60th minute sub for the effective Michael O’Halloran, and 30 minutes later he had his first goal as a Light Blue.

So what do Rangers find themselves with? From his half-hour cameo in Stenhousemuir (East Stirling’s temporary home), Dodoo’s off-ball movement looks to be outstanding; this is a young lad with an apparently innate understanding of positional sense – when to stick on the shoulder of defenders, when to make a run, when to hold position ahead of them and when to burst into the middle; Dodoo appears to be an intelligent striker with a truly inherent grasp of the position.

The remarkable aspect here is that is not something any coach can ever teach – you either have that or you do not, and from the brief appearance he made, it is pretty clear he does.

Add to this his ability to be in the right place at the right time, and his strength in the box, not to mention finishing ability, and Frank McParland has worked wonders with his contacts to bring the Ghanian-born forward to Ibrox.

It says a lot for how attractive Rangers have become under this board and this management that a player happily gives up the English champions Leicester for the massively less lucrative Scottish Premiership, purely to be a part of what Rangers are, and where we are going.

Dodoo is a player with the world at his feet. Like young colleagues and peers like Jordan Rossiter, Matt Crooks and Josh Windass, Rangers have hoovered up some absolute gems down south, and persuaded them the best move for their career is under the guidance of Mark Warburton and David Weir.

When Dodoo came on, he looked a class act. He looked strong, mobile, intelligent, hungry, and happy. Yes, he looked happy, as the headline photo shows.

This is a young lad who knows he has made the right choice, and is going to thrive in the right environment. A striker made to feel important, and who will only develop and improve under such nurturing.

And from what we saw – a dominant attacking display and an intuitive goal, he has hit the ground running at Ibrox.