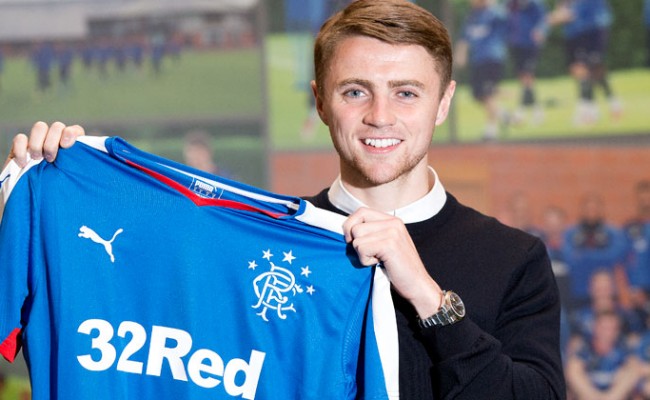 With promotion, Rangers’ fans had a slightly misguided belief that the Ibrox men suddenly had access to all the gold in the world. That the “Promised Land” of the Premiership would wield a steep hike in monies available and Rangers’ target market for the new season would be a huge rise compared with the ‘bargain basement’ of the Championship and other lower leagues in England.

So far, on five players and counting, Rangers have spent close to zero. That is correct; zip, zero, nada.

On Josh Windass, Matt Crooks, Joey Barton, Jordan Rossiter and Clint Hill the outlay for these players’ services has been borderline nothing beyond agent and development fees and impending wages.

While some fans may decry the apparent lack of use of a supposed ‘war chest’, it is better to get Joey Barton for free than pay for him, is it not? Simple economics. The only significant fee actually on the books for this summer’s business so far is the development compensation paid to Liverpool for Jordan Rossiter, supposedly in the region of a modest £250,000, based on cross-border rules for U23s.

But that aside, it is absolute zero – the Accrington pair’s (soon to be) former chairman is complaining about how business was conducted, but Rangers did nothing wrong and he is purely bitter about losing his two prize assets for free. If Rangers had paid out in January we would have been furnished with the players, but it would have cost the development fee/compensation. Now, they are free.

But it is not just those five players Rangers can boast of – if reports in the press are true, Croatian international Niko Kranjcar is set to put pen to paper this week and finally clinch his deal, something fellow new recruit Clint Hill appeared to already confirm when he arrived to seal his own move to Govan.

Ergo, Rangers will have made six very, very decent signings for a complete cost of £250,000. And few could deny a Rangers team filled with the likes of Jordan Rossiter, Niko Kranjcar and Joey Barton is SPL standard. It might not boast the Gazzas and Laudrups of yesteryear, but it is good enough to be in the top half of the table at the absolute least and is the step up in quality Paul Murray, Dave King et al promised.

Ok, we are not seeing the big bucks splashed out at the moment, but do we actually need to? As long as Mark Warburton is being supported, and we are obtaining the players we truly want, it is not critical to get players who cost. We want players who can actually help a serious assault on the SPL next season, not ones we have paid for purely to ‘make a statement’ with.

If Warbs wants a player who will cost, then one will conclude he will be supported to do so, within reasonable limits, but an SPL challenge and paying for players do not necessarily have to rely on one another.

Rangers’ market, for now, does seem to be out of contracts – Bosmans, in other words. James Vaughan, Lee Hodson and Adrian Mariappa are all such players and Rangers most definitely held talks with the latter (a defender), so for now, that is the frugal route Rangers are going in.

As long as the quality of the team benefits from it, it really is not a problem.