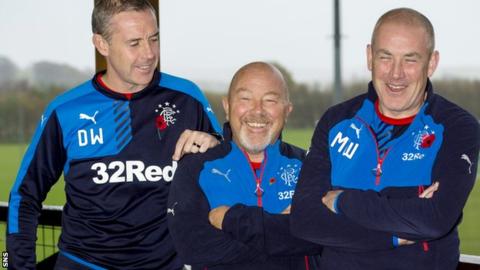 Mark Warburton, David Weir and Frank McParland have brought a completely new and different system for bringing players to Scotland to sign for Rangers. They are scouring the country for certain types of footballers who can fit into the manager’s plans for the next 3 or 4 seasons. It is all about value for money and they must have the potential to become excellent players under the guidance of a marvelous coaching system that they are presently perfecting at Murray Park. You can see the difference in the players they signed last season.

They are young, fit guys with plenty of energy to get about the park effortlessly. They play fabulous attacking football and try not to lose the ball unnecessarily, which makes things so much easier for the strikers and midfield players, but not so good for our defenders and goalkeeper. When we do lose the ball, it makes us vulnerable as our full backs are usually drawn out of position because of the attacking move.

Fair play to the management and coaches at Rangers, as they are working hard at ways to try and eliminate the kind of goals we lost against St Johnstone in the League Cup last season. We totally dominated the play and they defended very well and hit us three or more times on the break. It was a learning curve for the new team, as the Premiership team were a big step up from the sides we were used to playing against every week in the Championship.

All our previous managers paid transfer fees plus big wages to the players they wanted. When everything was financially sound at Ibrox, this was considered to be the right transfer policy, to keep the standard of the first team very high in order to win trophies each year. You must admit that we have had some top quality talent to watch, including English International players of the calibre of Paul Gascoigne, Terry Butcher, Mark Hateley, Trevor Steven, Mark Walters, Chris Woods, Gary Stevens and Graham Roberts – oh the memories!

We were also lucky enough to have wonderful foreign international players in our team such as the Danes Brian Laudrup & Peter Løvenkrands, then Arthur Numan, Ronald & Frank De Boer, Gio van Bronckhorst, Michael Mols, and Fernando Ricksen from Holland plus some of the likes of Claudio Reyna from USA, Jörg Albertz & Stefan Klos from Germany plus Claudio Caniggia & Gabriel Amato from Argentina. Then there was Gennaro Guttuso from Italy as well as Dado Pršo and Nikica Jelavić who arrived from Croatia plus Georgian Shota Arveladze and a host more.

But times have changed, and with the influence of Frank McParland, coupled by his extensive knowledge of all the lower leagues in England, the benefits of the new approach are already showing with the 4-year signing of the young potential Rangers star Jordan Rossiter, who is still only 19 years-old. He is from Liverpool and he was attracting a lot of attention from other sides trying to get his signature, but thankfully with the pull of a major team like Rangers making a move for him, it was a no brainer for him to sign for us.

I am looking forward to finding out all the other golden nuggets that are being lined up for us by our management team and our new brilliant scouting system.

Do you think that Jordan Rossiter will become a star player for Rangers?