Home Rangers How do Rangers plan for next season? 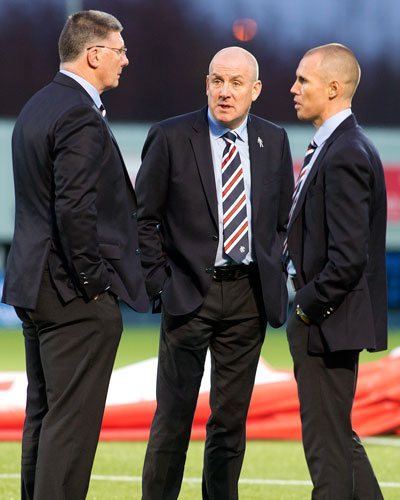 With the optimism that had understandably coursed through the veins of Rangers fans over the past month or so, Friday’s shuddering and inexplicable loss at the hands of Falkirk came as something of a crude bump.

The majority of the play on display from Mark Warburton’s men had been slick, incisive, flowing, and cohesive, and only bizarre sloppiness and arguable complacency later in the game cost all three points.

It has certainly provided food for thought regarding the quality of the squad in light of promotion to the Premiership, and has raised questions as to exactly what requires enhancing come this summer.

It is well on record that Warburton and chairman Dave King do not intend a mass cull or exodus, famously stating that they wanted players last summer and January who would be ready-built for promotion to Scotland’s top tier, preventing Rangers having to rip it up and start again come summer 2016.

Warburton has already secured Accrington Stanley pair Josh Windass and Matt Crooks, who look set to be heavily involved in the first team next season – Crooks certainly fills the glaring hole that is defensive midfield, and Windass will provide further creativity just behind the attacking trident, or indeed will play there, depending on Warbs’ preferences.

However, what else needs resolved?

Evidently Rangers are embarrassed with riches up front. The attacking quality consists of Harry Forrester (if his deal is extended), Barrie McKay, Martyn Waghorn, Kenny Miller, Michael O’Halloran, and aforementioned Windass, with Nicky Clark and David Templeton in reserve, if both remain (admittedly unlikely). Surely no more attackers are required beyond perhaps one more pure goalscorer?

And midfield sees no lack of personnel either; Andy Halliday, Dominic Ball (if he remains beyond the expiration of his loan), Gedion Zelalem (although he has struggled after a bright opening, and again his loan ends this June), Jason Holt, Nicky Law, Dean Shiels, Matt Crooks and potentially Josh Windass again provide a fair chunk of depth here, even if the quality is not absolutely marquee throughout. This area looks fairly busy as well but Warburton will probably have an eye on one or two signings here.

The question of defence is the one on most fans’ lips after three calamities at the back saw Warbs’ side effectively gift the Bairns the win last weekend. While James Tavernier and Lee Wallace have been impressive in attack and in providing width, there have been a few questions over their defensive positionings now and then, with more than once seeing either caught off-guard after another foray forward. However, against better quality Warbs will surely make them curb those attacking instincts when need be in favour of protecting the backline more consistently.

The central partnership and the guts of Rangers are where arguably most problems seem to lie. Doubts remain over Danny Wilson, Rob Kiernan and Dominic Ball’s abilities against better sides on a consistent basis – all three were outstanding against Dundee, but a bit of a liability v Peter Houston’s men.

The connection here to holding midfield is also an issue – there sometimes appears to be a huge gap between both sets of players, with distance between central defence and central midfield a bit too lengthy, and this opens up the defence like a hot knife through butter.

Whether this requires coaching of the existing players to adapt better or the blunt addition of better ones remains to be seen.

Naturally Mark Warburton knows far better than any of us supporters what his squad needs, and where it excels. He is the one, along with Sir Davie of Weir, who works with them daily and knows them inside out.

He will know what is needed, and here is hoping he is supported to obtain the resources he needs, if any, to launch a worthwhile assault on the Premiership next season.