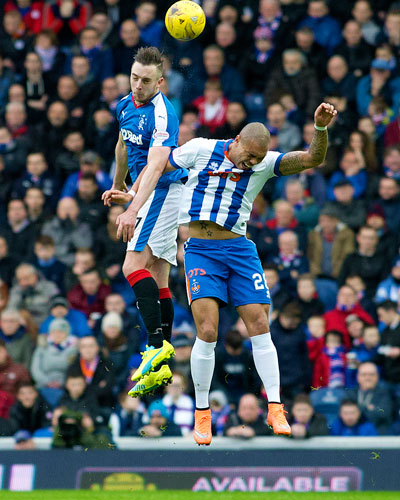 Tonight’s trip to Rugby Park sees a significant number of subplots simmering along with the build up.

First of all we have the ongoing Rangers v the Premiership soap opera, whether it is the off-field politics nonsense such as the ‘Sevco’ dross or the onfield ‘can Rangers compete at that level’ story.

Then we have the Ibrox men’s current form, which, being generous, is pretty underwhelming. Five goals in five matches which has seen two draws and three patchy wins. Say all you like about the admittedly nice football, and the flurry of shots on target, it is not producing the impressive results it did in late December and throughout January.

Last but not least is Kilmarnock’s appointment of new manager Lee Clark, confirmed yesterday morning; a new coach coming in will always see a tabula rasa for the whole squad, hence they try doubly hard to impress their new tactician. And the first match following the appointment is usually a very tricky one for their opponents. And in Killie’s case, that is Rangers.

Ultimately, supporters are mixed in what they feel about winning or losing tonight’s match. For some, every encounter with a Premiership side is a further measurement of just where the present squad stands in comparison with that quality of team. Each match adds to the overall picture, as opposed to a snap judgement based on one cup encounter, and should Rangers lose, it adds to the rather disappointing record Warbs has had thus far.

For other supporters, such issues just do not matter – promotion is the end game and as long as three points get picked up every week, any success in cups is a welcome bonus and just good for morale. They want their team in the Premiership, and that is the ultimatum.

However, whichever one you are, or maybe even a mixture of both, there can be little doubt Rangers need a bit of a jumpstart to their present form, and a decent win at a Premiership side would be a pretty good tonic to that end. For all the possession, the shots, and the stubborn defence, inasmuch as these are all positive and show a club going in the right direction, the currency of football is always victories and goals, and Rangers need to show product for their endeavour.

Rangers are not nearly men, never were, and should never start.