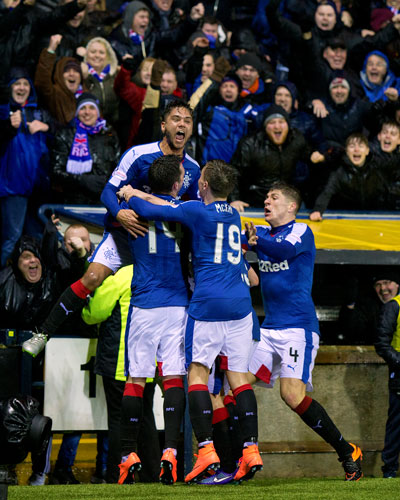 At a wild, wet and windy Rugby Park last night Mark Warburton’s Rangers finally broke their Premiership duck. It took a literal last-second winner from early substitute Nicky Clark to do it, but at last, on the third attempt, Warbs’ men overcame opponents from the top tier in Scotland.

What conclusions can be drawn from this performance and result? Well, conditions made smooth silky football extremely difficult, with both sides guilty of giving the ball away, and the general standard of play on offer being mediocre as a result.

But the confidence this victory will give cannot be understated. Bear in mind, not only did Rangers finally beat a side from the top tier under Warburton, but they did so with two bright new signings cup-tied in Michael O’Halloran and Billy King, and the early departure through injury of star striker Martyn Waghorn.

Inside five minutes Rangers lost their talisman in a bit of a blow following his successful conversion of the early penalty, and he was replaced by the very different Clark. Admittedly this will give Waggy a badly-needed rest but it certainly is not the circumstances we would have wanted it under.

Nevertheless, Rangers were not at full strength after 5 minutes for this one, nor technically full strength from the off, but after a war of attrition over 90 minutes including an explosive first 10, the match calmed down into a soggy battle of who wanted it more.

And Rangers’ players, including the outstanding Wilson and Kiernan defence, clearly wanted it more, with that last-second corner and sumptuous finish from Clark taking the visitors to the quarter finals.

A word must also be said for a number of users who, aware this match was completely blacked out for broadcast thanks to UEFA’s ridiculous rules regarding UCL football, filmed it live on their phones at the ground and broadcast globally to Bears around the world via the Periscope app. A sign of fan power for the positive and worthy of commendation.

But, back to the result – Rangers under Warbs have shown they can compete with Premiership sides at last. That they can beat them. It is a step in the right direction and hopefully this is the boost the team badly needed to get form back on track.