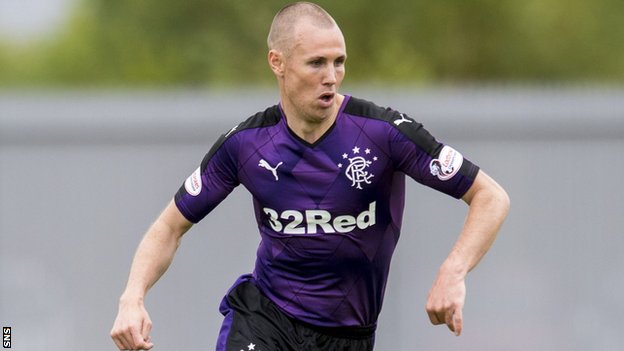 With the unexpected news Rangers’ veteran striker Kenny Miller signed an extension yesterday to extend his stay at Ibrox till summer 2017 at the earliest, reaction from the Rangers’ faithful was mixed to say the least.

Manager Mark Warburton was gushing in praise of the former Scottish international, 35, pointing to his experience and importance on the pitch as justification for his new deal, but this did not stop many fans objecting to the prolonged stay of the former Derby and Hibs striker.

So, the question is has Miller earned a longer contract?

A great number of supporters would simply point to his utter profligacy in front of goal – that where once he was fiercely prolific, now he struggles to net at all. And they would have a fair point; this season Miller has managed a reasonable 7 goals, but none since 16th of August when he bagged a brace in Alloa – in short, the man’s goals have dramatically dried up and he has gone three months without netting.

However, while Warburton has admitted his contract has been extended on football principles, Miller has also been awarded a coaching role with Ian Durrant’s U20s, and will provide the academy with vital experience and wisdom.

One thing no Rangers fan can deny is Miller’s work ethic, professionalism, passion and all-round support play – despite the ignominious nature of his departure in 2011 (which he thoroughly regrets) he always gave everything on the pitch for Rangers when in the jersey, and has admitted in recent times that he is a boyhood fan – despite one of his club choices, he really is one of us – three spells at Ibrox including giving up a very cushy gig in Canada at the Whitecaps to join Rangers in League 1.

And on the pitch he has been quintessentially professional – one of the few to have pass marks during the infamous playoffs, Miller has never been shy to dig in, work hard, scream at those around him and run like a gazelle on steroids.

Miller’s hard graft in the final third allows the likes of Waghorn, McKay and Oduwa to express themselves and it is easy to see, when you look deeper, why his manager has extended his stay.

Add to that the aforementioned coaching role at Murray Park confirms the Magic Hat’s faith in him to nurture the kids as well as providing the experience on the pitch for the senior team when needed.

Miller has earned this deal – he might not bag goals like he used to, but he gives plenty more.

If Mark Warburton trusts him, who are we to question it?