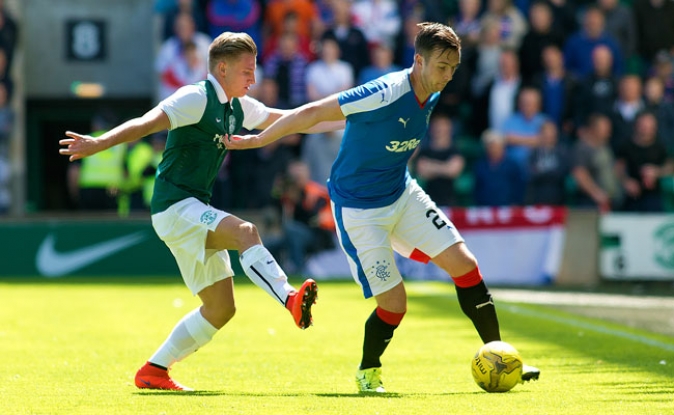 While the first 30 minutes of
this afternoon’s match were slow, and Rangers struggled to get to grips with a
fast-paced home side, including the concession of an incredibly sloppy goal, it
is plain to see the level of resilience and teamwork which followed this, and
when new signing James Tavernier brilliantly netted from a edge-of-the-box free
kick, it galvanised the entire side to finally splutter into life.
This was a hungry, methodical,
clinical and devastating display from Rangers, absolutely decimating a very
strong Hibs side.
Many will point to Scott Allan’s
absence from the starting XI as a factor, but that would be illogical. Even
without him they were superior. Until, that is, Tavernier equalised.
Then the tide shifted in a
dramatic fashion, which saw droves of home fans head for the exit before Allan
even made his appearance.
An appearance which made
absolutely no difference, incidentally.
From Halliday’s curling sizzler into
the postage stamp, to Miller’s clinical finishes from close range, to that
Tavernier free kick opener, this was a statement to Scottish football; Rangers
do not pretend we are the finished article, or rebuilt to the glory days from
years ago, but we are going in that direction.
No one in Scottish football can
ignore Rangers going to Easter Road and registering 6 goals. It is not quite
Rangers getting 3 at the Gerland in Lyon in
2007, but in the context of today, it is just as important and just as
impressive.
While there is still much to be
done, with some tinkering required and a few new signings probably still
needed, Rangers today put down a marker – a marker which completely slaughtered
a very competent Hibs team, and embarrassed them on their own turf.
It was Rangers’ most emphatic
display since 2012, it is that simple. It might have had a delayed start, but
by 90 minutes and Rob Kiernan humiliating Scott Allan, the tone had been set.
Welcome to Mark Warburton’s
Rangers; We Welcome the Chase.