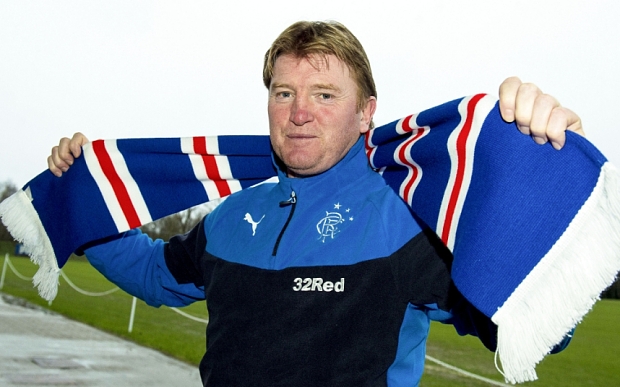 It takes a lot to cope with being
manager of an ancient institution the gravity of Rangers. History of epic
proportions over 142 years and growing, while your every move, action, decision
and even sartorial choice is scrutinised to levels you will rarely see at any
other Club.
Anyone who becomes manager of
Rangers puts their reputation on the line, and their own sanity too. Which is
why I formally wish to, on behalf of all Bears who agree, express my heartfelt
gratitude to Stuart McCall who came when duty called and gave everything he
could to the cause, with no way of knowing if he would remain permanently.
Rangers were in a bad way early
March; outgoing manager Kenny McDowall had, if it was possible, been even worse
a boss than his predecessor Ally McCoist, and reaching the playoffs themselves
was in doubt; with promotion itself simply becoming an absolute pipe dream.
Rangers were truly in tatters,
that humiliating loss at Easter Road and that tame defeat in February’s Old
Firm clash summed up the Club’s fortunes at the time, and despite the change in
boardroom regime, things were catastrophic on the pitch.
When the board severed McDowall
and brought in Stuart McCall, he had the unenviable task of trying to get something out of the worst squad and
first team in Rangers’ history. The state of the starting XI went below
embarrassing, and the lack of confidence, quality, and regimented tactics
shamed the good name of Rangers FC.
But despite a couple of drab
draws v Livvie then Alloa, that win at Easter Road gave Rangers fans belief,
hope, and a genuine sense that promotion was now possible.  That was down to nothing more than McCall.
He took a bunch of absolute
rubbish and made it fight. For a short while at least. McCall gave his all to
the Rangers cause, and while ultimately it was more or less universally agreed
he was not the man to take the Club forward after playoff failures, he still
gave up a cushy easy job at BT on media duties, while putting the Scotland role
on the backburner.
Stuart McCall deserves all the
credit in the world for what he contributed; ultimately it was a failure, but
the players he inherited were something beyond diabolical, and the fact he got
Rangers to the playoff final is in itself a vindication.
The weakness of the squad was
exposed by an atrocious Motherwell; it was easy to see why they had ended up
second bottom in the SPL, but their comfort against this disgraceful Rangers
team summed up what McCall had to deal with.
Did he deserve a crack this
season? Probably not; he is a good man, a very solid manager, and he was give
absolute dross to work with. But he has never really been known for being
progressive, and rebuilding a tattered team. He is the kind of manager who can
take good players and make it work cohesively, as he did for almost three years
with Motherwell.
But that is not what Rangers need
right now. A rebuilding job with a fresh pair of eyes, and that is what Mark
Warburton has.
McCall gets our thanks, our
appreciation, and our respect, for coming when we needed him and giving it as
good a shot as anyone could have.
He is welcome back at Ibrox any
time.